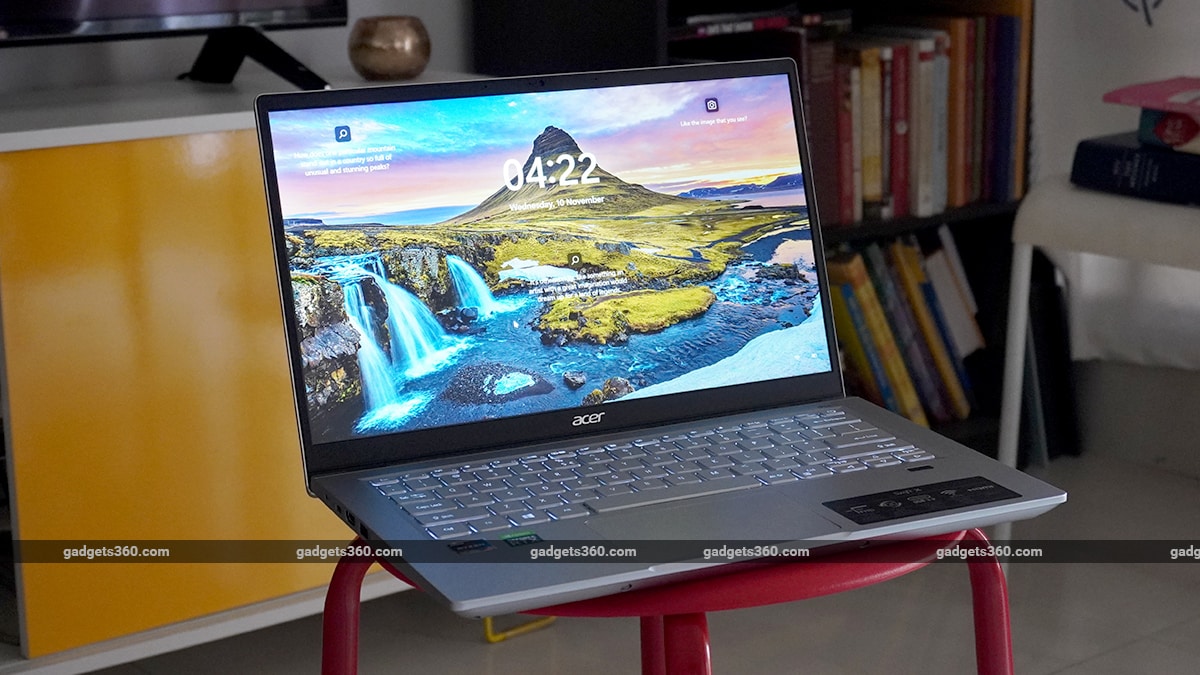 The Acer Swift series is the company’s line of premium thin-and-light laptops, and today we’ll be checking out the latest Acer Swift X model, which launched in India in September. The Swift X is special because Acer has managed to pack a powerful AMD CPU and a discrete Nvidia GPU inside a 14-inch laptop body measuring only around 18.8mm in thickness. It’s a power-packed machine for sure, with great portability, but with prices starting at Rs. 84,999, is it good value? I’ve been using it for the past week and this is what I think.

The Acer Swift X has a pretty standard laptop form factor but the dual-tone body colour helps it stand out a bit. The silver and champagne gold trim on the unit that I have looks nice. It’s not too flashy and yet does not look boring. The fit and finish of the chassis is good, and there isn’t a lot of flex around the palm-rest area. The lid does have a bit of flex but the screen seems well protected and doesn’t warp when light pressure is applied.

Weighing roughly 1.39kg, the Acer Swift X is not too heavy, and its overall compact size makes it very portable. You get a good selection of ports for a 14-inch laptop. These include a USB 2.0 port, a USB 3.2 Gen1 Type-A port with power-off charging, a USB 3.2 Gen2 Type-C port which can also charge the laptop, and a full-sized HDMI port. There’s also a headphone jack, kensington lock slot, and a round-pin charging port. There isn’t an SD card slot on the Swift X. There are stereo speakers on the bottom, and plenty of air intake vents. The exhaust vent is placed between the hinges of the lid.

The direction keys feel cramped on an otherwise comfortable keyboard

The keys on the keyboard are well spaced and aren’t very noisy. There’s white backlighting which illuminates all the letters evenly. The arrow key cluster is a little cramped due to the Pg Up and Pg Dn keys being placed right above it. The Acer Swift X has a fingerprint scanner placed just below the keyboard area. It’s responsive and works well for logging in to Windows. The trackpad is roomy and works well, although it’s not as precise as a glass trackpad.

The 14-inch display on the Acer Swift X is an IPS panel with a 16:9 aspect ratio and a full-HD resolution. It has a claimed brightness of 300nits and this was more than adequate for my usage. The display also has narrow borders on three of its four sides, along with a webcam on the top. In the box, you will find a 90W power adapter and the user manual.

The configuration of the Swift X that I received from Acer is available on its India website, at the time of writing this review. It features an AMD Ryzen 5 5600U CPU with integrated Radeon graphics, 16GB of RAM, a 512GB PCIe NVMe SSD, and a discrete Nvidia GeForce RTX 3050 GPU. That’s quite the spec list for a compact, 14-inch laptop. This configuration is priced at Rs. 86,990 on Acer’s website, down from its Rs. 1,09,999 sticker price. There’s another variant of the Swift X with an Nvidia GeForce RTX 3050 Ti GPU, but I couldn’t find this or another colour variant online.

Acer claims to have made provisions to handle all the heat from such powerful components fitted into a compact chassis. Air can be pulled in from the gaps between keys on the keyboard, and there’s a specially designed and positioned exhaust fan which is said to increase airflow by 10 percent. You can cycle through various cooling modes with the Fn+F key combo.

The Swift X also has Acer’s PurifiedVoice system which is said to suppress background noise when on a video call. You get Wi-Fi 6, Bluetooth 5.2, a 720p webcam, and a 4-cell 59WHr battery. The stereo speakers work with the DTSsound app which offers various listening modes and equaliser presets to play with.

My unit came with Windows 10, but I was given the option to upgrade to Windows 11 during the initial setup process, which I did. Some of the preinstalled apps include a limited-time subscription to Norton Security Ultra and a full version of Microsoft Office 2021 Home & Student. The typical Acer apps such as Care Centre are also present.

The Acer Swift X was nothing short of a trooper in the time I used it, and honestly, I expected nothing less. The powerful specifications make Windows 11 feel snappy and everything works very well. It boots and loads apps quickly, and the display makes everything look sharp and vivid. In fact, I rarely found myself increasing the brightness beyond 60 percent when indoors. Vertical viewing angles are also pretty decent. The display has a matte finish so reflections aren’t much of a problem.

Webcam quality was strictly average. Even if your face is well lit, highlights can look overexposed and darker regions are very grainy. The colours are still better than what you get from a MacBook Air (M1), but average overall. The keyboard is generally comfortable for typing on but the proximity of the Pg Up and Pg Down keys to the direction pad means I would accidentally press the wrong key pretty much every single time, which was annoying.

Watching videos on the Acer Swift X is enjoyable but the stereo speakers are not great and sound tinny. The volume isn’t loud enough for gaming, but they are alright for casual use.

Speaking of gaming, the Swift X manages to hold its own even in demanding games. Far Cry 5’s in-built benchmark averaged 51fps with the Ultra graphics preset and the display’s native resolution. There were times when the frame rate briefly dipped to the 30s during actual gameplay, but overall, the game ran very smoothly. In the Shadow of The Tomb Raider, the game’s benchmark returned an average frame rate of 49fps at the ‘Highest’ quality setting with DLSS enabled.

When playing Doom Eternal, the game restricted texture quality to the ‘medium’ setting due to insufficient video memory (there’s 4GB of GDDR6 RAM on the GeForce RTX 3050) but I was able to push the other sliders to ‘ultra’. Here, I was averaging 65-70fps during actual gameplay.

While it’s great to see such a compact laptop handle moderately heavy gaming, one big side effect is excessive heating. Within minutes of starting a game, the exhaust fan ramps up and is audible. More worryingly, the bottom portion and most of the keyboard area gets very hot, pretty quickly. The right palm rest is the only area that stays cool, but most of the keys, left palm rest, and the space above the keyboard gets very hot. Unless you’re using a controller, gaming does become uncomfortable after a point because of this. Even with all the heating though, games ran fine and I never really felt that performance was being throttled.

The Acer Swift X’s chassis is not designed to handle a powerful GPU, which is why it gets very, very hot when gaming

This brings us to battery life. Acer claims the Swift X can deliver up to 17 hours of video playback, but real-world use isn’t that simple. With Windows 11’s battery profile set to ‘Balanced’, I barely got around four and a half hours of runtime, and this was with intermittent use with mostly Web apps in Firefox, music from Spotify streaming to a Bluetooth headset, and some videos in the Prime Video app.

However, when the battery profile is set to ‘Power Efficiency’ mode, I was able to get nearly double the runtime with a similar workload. Performance didn’t seem to be impacted too much, at least when using basic apps for Web browsing or music playback. Even Photoshop CC 2020 ran fine under this setting. I did run Battery Eater Pro too, which ran for a decent 1 hour, 50 minutes, without using the discrete GPU. Realistically, you can expect around eight to nine hours of runtime with medium usage under the battery saver profile in Windows 11, which is not bad at all considering the specs of this laptop.

The Acer Swift X is uniquely positioned to offer very good performance for creators while still being highly portable and compact, which is rare to find. It looks good, performs well, and has a comfortable keyboard as well as a bright and vivid display. Battery life is also pretty satisfactory, even though it doesn’t quite live up to Acer’s claims.

If I had to knock a few points off, then that would be for the average quality webcam and lack of an SD card slot. I’m not a big fan of the cramped direction pad either. The Swift X runs very hot when stressed, particularly when gaming, which is to be expected since this chassis wasn’t exactly designed with gaming in mind.

The Acer Swift X could be a very good option if you want an ultraportable with reasonable battery life that can handle content creation software and even some games if the occasion calls for it. However, if gaming is a priority, then I’d recommend looking at Acer’s Nitro or Asus’ TUF series of laptops, which offer more competitive specs and better cooling for roughly the same or even lower prices.