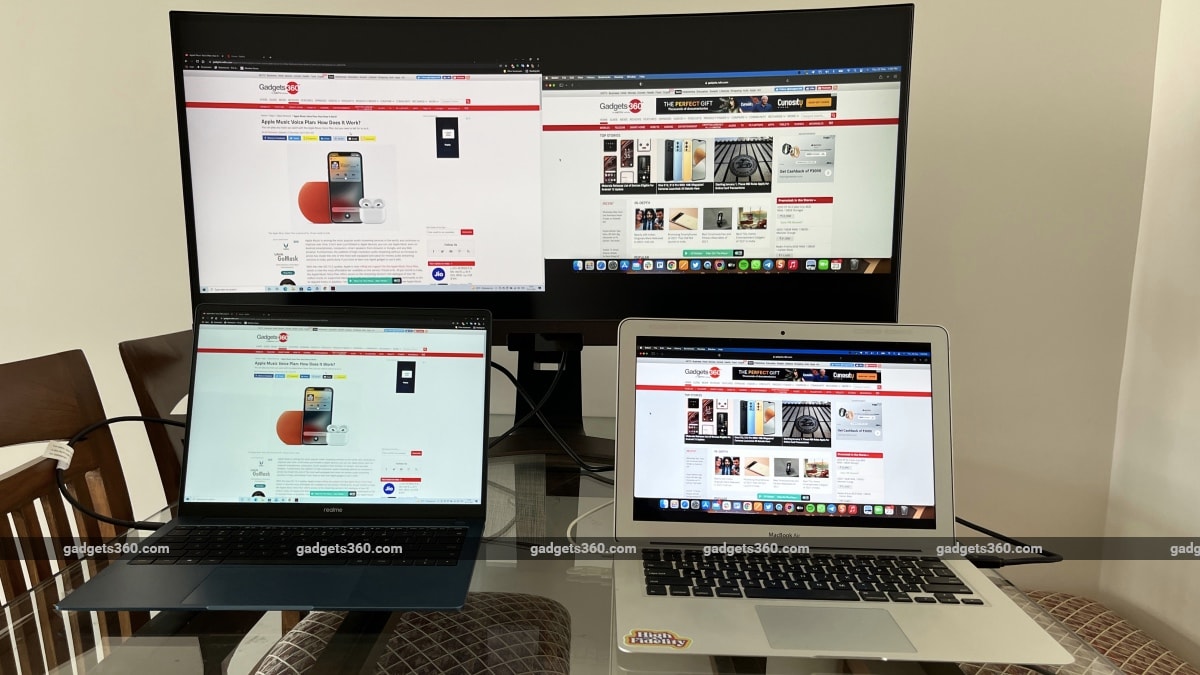 A good, productivity-focused monitor will go a long way in improving your efficiency while working, but it isn’t often that we find a monitor that is equally geared for life after work hours. Among the world’s leading names when it comes to monitors is Taiwan-based BenQ, and one of the company’s newest models in India is the EW3880R WQHD+ IPS curved ultra-wide monitor. Apart from the 21:9 aspect ratio that makes it useful for multi-tasking and multi-device connectivity, it also has a built-in front-firing 2.1-channel speaker system.

Priced at Rs. 97,500 in India, the BenQ EW3880R is undoubtedly expensive and meant for a very niche audience. However, it promises a lot for the price, including modern connectivity options, a high-resolution 37.5-inch IPS LED screen, good sound, and more. Is this the best premium monitor you can buy right now in India? Find out in this review.

The BenQ EW3880R monitor has a 2.1-channel front-firing speaker system

While I never expected the BenQ EW3880R monitor to be small and easy to handle, its actual size and proportions came as a surprise to me when setting it up. It’s big, heavy, and quite imposing in its design, with a curved 37.5-inch WQHD+ (3840×1600-pixel) 60Hz IPS LED panel and an aspect ratio of 21:9. Although this ultra-wide aspect ratio seems a bit awkward at first, it suits all kinds of functions, including productivity and entertainment.

While the big screen naturally dominates the front view of the monitor, it’s hard to miss the speaker grille right below. This houses the 2.1-channel speaker system, with two 3W mid- and high-range drivers plus an 8W woofer. There’s also a small button in the bottom-right corner which activates the built-in high dynamic range mode.

The BenQ EW3880R monitor is quite thick, and at its size, the 2300R curvature is prominent and conspicuous. The screen mounts onto an imposing and heavy centre-balanced stand, which allows for plenty of adjustment, including up to 120mm height near the top, up to 15 degrees of tilt, and up to 15 degrees of swivel in either direction.

All of this balances safely on a V-shaped pedestal that takes up a fair amount of space on whatever table you intend to place the monitor on. The size of the stand and the space it takes up also mean that you’ll need plenty of room between the monitor and the wall behind, as well as between yourself and the screen, to be able to properly and safely use it. I had the monitor placed around three feet away, and while the curved screen did help a bit with edge visibility, it felt a bit too large for my workspace.

The remote is small and runs on a single CR2032 battery

Included in the box of the BenQ EW3880R monitor are a USB Type-C cable, an HDMI cable, the power cable for the monitor, and a remote. There are also detachable plastic plates that can be fixed onto the back of the monitor to cover the stand-mount attachment and ports, but these need not be used if you want quick and easy access or if the monitor is placed against a wall.

The 2.1-channel speaker system and large curved screen aside, the BenQ EW3880R monitor has a lot going for it by way of features and specifications. The monitor supports the HDR10 format, and has a peak brightness of 300 nits when using HDR, or 250 nits without it. Additionally, you can run two separate source devices on the monitor simultaneously in split-screen mode.

Video input options on the BenQ EW3880R monitor are impressive, with two HDMI 2.0 ports, one DisplayPort 1.4, and one USB Type-C port. Usefully, there is also a 3.5mm headphone jack for external audio connectivity. The most impressive is USB Type-C connectivity, since this allows for a laptop to send a DisplayPort signal to the monitor and receive up to 60W of power for charging simultaneously. This also feeds the monitor’s two downstream USB 3.0 Type-A ports, so you can connect your PC to additional peripherals and set up a docking station with just a single cable.

The high dynamic range mode works a bit differently from how it would on most televisions. While TVs automatically detect HDR content and switch to HDR picture modes, the BenQ monitor has to have HDR manually activated. This is as simple as pressing the ‘HDRi’ button on the front of the monitor or on the remote, and then cycling through the three presets – Cinema HDR, Game HDR, and standard HDR – all of which are said to be optimised for their specific use cases. There is also a ‘Night Mode’ which is said to adjust the sound to make voices more clear even at low volumes.

The aspect ratio of the BenQ EW3880R monitor allows for native 21:9 content to play using the entire screen

The BenQ EW3880R monitor has its own remote, which can be used to control power, select the source, control the ‘Night’ and HDR modes, adjust the brightness and volume levels, and control a few other basic settings such as the audio mode. The remote works on a CR2032 battery; while the company claims that this is pre-installed in the remote, my unit didn’t have one and I had to open the remote to install one after purchasing it separately.

The remote is small, and made it much more convenient to control basic things such as power and volume after the initial setup. You could also control the monitor without it using physical buttons, but you’ll have to reach around the back to find these.

Although the BenQ EW3880R monitor is pitched as entertainment-friendly, it’s quite different from other monitors with similar credentials such as the Samsung Smart Monitor M7 which has a 16:9 aspect ratio and its own operating system. The BenQ monitor is considerably larger, has a curved screen, and has a 21:9 aspect ratio, offering a rather different viewing experience.

All of the above points do, however, make the BenQ EW3880R monitor particularly well suited as a large screen to use your laptop or PC with, with the wide aspect ratio making multi-tasking particularly convenient. The most obvious way to do this was to run two apps or programs side-by-side on the same laptop. I was able to comfortably keep an Internet browser and a Word document open simultaneously. It’s just like having two monitors side by side, but without any borders in between.

The monitor has a 2300R curvature, which is particularly helpful in reducing light reflections and glare

I was able to run Windows at the full resolution available and at 60Hz when I connected the Realme Book Slim using the USB Type-C cable included with the monitor. The resolution was properly adjusted for the screen, and Windows also recommended a suitable scaling level to ensure legibility of text and proper app visibility.

I particularly liked the split-screen option, which allowed me to select two inputs and have them share screen space. This worked well when using the Realme Book Slim and a MacBook Air connected using the HDMI port. Both laptops adjusted their output resolutions to the best fit with the available screen space. Split-screen options include a 1:1 split, 2:1 split, or a picture-in-picture box for the secondary input, allowing for plenty of flexibility with how you want two source devices displayed.

Apart from occasional multi-tasking, for which I had both laptops connected in split-screen mode, I often tended to use the BenQ EW3880R monitor as a reference screen for reading and video content, with multiple apps or windows open side-by-side. Colour accuracy and sharpness were impressive, making this a good monitor for my occasional photo editing tasks.

Furthermore, the sharpness of the screen made reading text a pleasure even from a considerable viewing distance and with the text natively magnified by Windows. It was also reasonably bright even without HDR turned on, and the curvature of the IPS panel helped to reduce light reflections, making for a clean and consistent viewing experience regardless of ambient light.

Where the BenQ EW3880R truly performed well was with video and streaming content. The odd aspect ratio and WQHD+ resolution of the screen meant that streaming content from Netflix and Amazon Prime Video was capped at full-HD whether using the native apps for Windows or through a Web browser.

Native 21:9 content, including Red Notice on Netflix, scaled perfectly to the screen and used all its real estate for a proper cinematic viewing experience, and this more than made up for the resolution cap. Sharpness was decent and colours were accurate, making the monitor well suited for occasional post-work entertainment, and even late-night movie watching. HDR improved the picture slightly by way of better brightness and slightly more impactful colours when watching video content, but I preferred to keep it off for everyday work.

Sound quality was decent on the BenQ EW3880R monitor’s front-firing 2.1-channel speaker system. Although it wasn’t very loud, the sound was clear, detailed, and well tuned for short distances. I had to use it at the highest volume level almost all the time to be able to hear clearly, and the ‘Night Mode’ only made a small difference in improving voice clarity at slightly lower volumes. Although nowhere near as good as a proper speaker system or even good headphones, audio performance is good enough for a monitor and has been optimised for the both everyday productivity use and entertainment.

With the EW3880R curved ultra-wide monitor, BenQ has a rather interesting product on its hands. This monitor is large, imposing, and well suited for the computer-bound professional, whether working from home or at an office. Visuals on screen are sharp, colours and motion are rendered well, and there are enough modern connectivity options to cater to most source devices and connection scenarios.

The split-screen mode, which lets you use two devices simultaneously, is an excellent way to put the wide aspect ratio to good use. The built-in 2.1-channel speaker system is useful and gives the BenQ EW3880R its entertainment-friendly credentials. This device could be particularly well suited to anyone who might need a single display for both work and post-work use, especially in space-constrained homes.

However, priced at Rs. 97,500 in India, this monitor is perhaps a bit too expensive, even for a curved ultra-wide model. This is a specialist product and is priced at a considerable premium, but is worth the investment if your usage fits in with the connectivity, features, and design on offer.