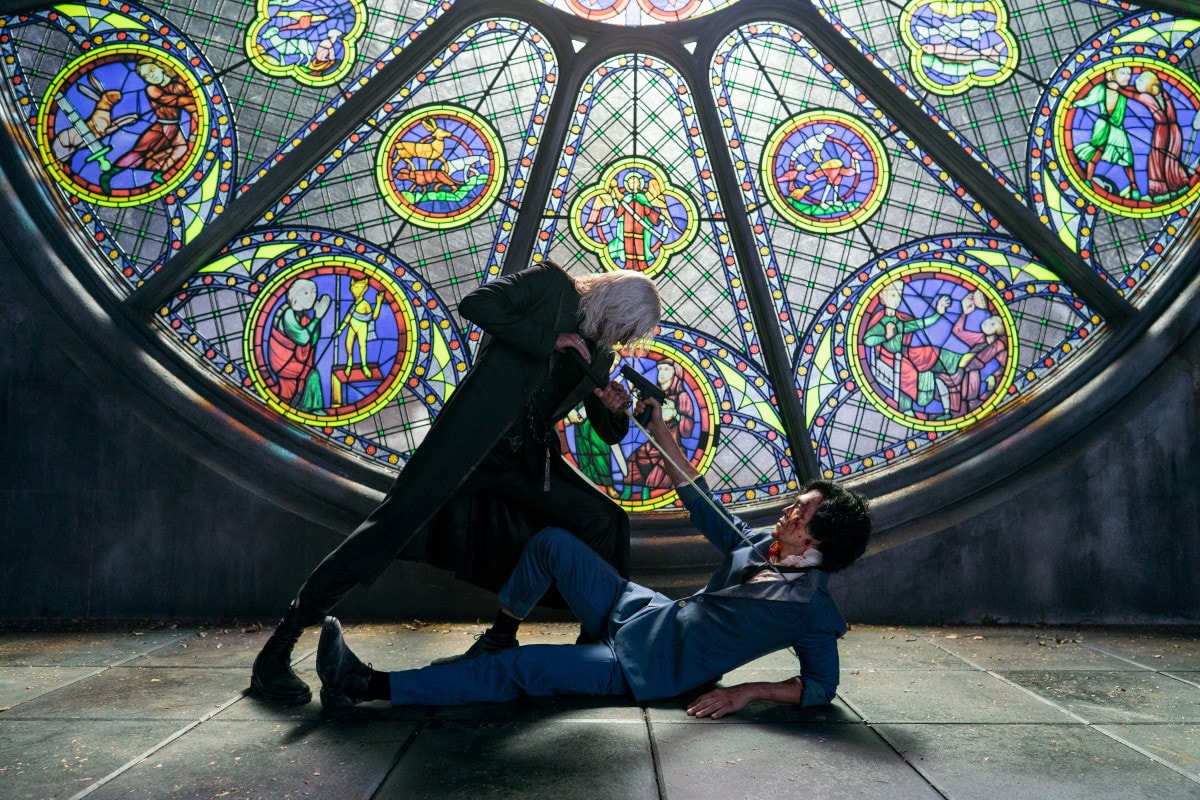 Cowboy Bebop — out Friday on Netflix — is at its best when it’s channelling the same energy the original anime it’s based on was inspired by: pulp fiction. It’s hard to get it right because if you go overboard, it’s on the nose and you stop caring. But Cowboy Bebop really nails its pulpiness. The important thing with making a pulpy show is getting the audience on your side early on. The Netflix series — developed by Christopher Yost (Thor: Ragnarok), and with André Nemec (Zoo, Mission: Impossible – Ghost Protocol) as showrunner — does that. Hence, you want to travel with its characters. It’s really fun at times, and it can be funny too. And because it’s trying to be goofy, a bit like the anime, certain things are forgivable. You demand less logic from the events that are occurring on screen.

Add to that the small touches brought to action by Cowboy Bebop’s two directors, Alex Garcia Lopez (Utopia, The Witcher, Daredevil season 3) and Michael Katleman (Zoo, The Last Ship). They cut to a drop of water falling to the ground before a fight starts. A character compliments their opponent on a move in the middle of a fight. A climactic samurai-type fight is scored to shakuhachi and juxtaposed with a massive stained glass. A character runs to someone’s rescue while holding onto an ugly doll they bought for their kid with a lot of money. An entire action scene happens out of focus in the background while their partner attends a school recital. It’s wacky — and it’s a boon.

Animation has always been an expensive medium, and Cowboy Bebop was all the more so for a Japanese studio in the late ‘90s. As a result, the anime had a low frame rate — it was more akin to a flip book at times and the action would happen in spurts. Netflix isn’t lacking for money, but the shift to live-action means everything is fluid, always. So, when it wants to mimic the anime’s action spurts, Cowboy Bebop resorts to jump cuts because that’s the only way to emulate the low frame rate.

Though it retains the anime’s essence, Cowboy Bebop isn’t afraid to rearrange the furniture. The amnesiac Faye Valentine (Daniella Pineda, from Jurassic World: Fallen Kingdom) is introduced right from the start. But another beloved character from the anime is only introduced at the very end of the season, in what is a clear setup for a potential second season. Netflix has yet to announce anything.

That said, the Netflix series straight up borrows from the anime too. Each of its episodes are called sessions (the anime loved jazz music), it keeps the subtitles the anime had at the end of episodes (“see you space cowboy”) and the bounty-hunting infotainment programme Big Shot, and the famous opening credits have been recreated and extended — with the original theme song “Tank!” by Yoko Kanno. (Yes, Kanno returns as composer from the original, alongside anime director Shinichirō Watanabe in a consulting capacity.) The jazz music and the swanky design means you will want to stay for Cowboy Bebop’s opening titles — and not hit Netflix’s “skip intro” button.

With a mix of neo-noir, Western, and hardboiled detective fiction, Cowboy Bebop shifts genres fluidly. For those who have never seen the anime original, it will give you serious Firefly vibes at times. The Netflix series is oozing with style; its colourful production design — yellow is virtually everywhere — in combination with its jazz roots sets it apart from the drab that we are treated to regularly on streaming. Cowboy Bebop settles into sitcom type beats that really drive you from episode to episode. (There are 10 episodes in season 1 — I’ve seen all 10.) You start to care about these characters and then you want to know more about them.

But it’s less successful with its dramatic beats. Cowboy Bebop has a rich backstory for its main lead that it teases nicely across the season before diving into a prequel episode at the eleventh hour. But the characters stuck in the Netflix series’ dramatic portions are less compelling and/ or cartoonish. It’s here that Cowboy Bebop goes overboard — and tips the scales away from itself.

The first season of Netflix’s Cowboy Bebop is split into two halves of sorts. One follows the bounty-hunting crew of BeBop, a rusty spaceship where things don’t always work because the team is not making enough from their bounties. There’s the chain-smoking, collar-raised, blue-suited Spike Spiegel (John Cho, from Star Trek) who has a troubled romantic and criminal history. Spike, who does his own thing, is running from his past — with his terrible secret eating at him from the inside.

From Eternals to Cowboy Bebop, What to Watch in November

His partner is ex-cop Jet Black (Mustafa Shakir, from Luke Cage) with a cybernetic arm. His wife left him for an ex-cop friend of his, but Jet loves their daughter Kimmie (Molly Moriarty) and will do anything for her. Jet is usually the voice of reason in the room. That leaves Faye who has amnesia because she was woken up unexpectedly from cryo-sleep, and is now on the hunt to find out who she really is. Pineda is funny and a riot at times on Cowboy Bebop. Though she’s introduced at the start, Faye is then forgotten for a couple of episodes.

There’s a fourth non-human member of the Bebop crew as well, in Ein, a Pembroke Welsh Corgi who was experimented upon in a research facility. Ein is both helpful and not — he comes to the rescue of the crew at times, but he also gets them into trouble. The dog has a small-ish role in Cowboy Bebop, and like Faye, is inadvertently forgotten / intentionally left behind here and there.

Spike and Jet have one rule: never get involved with the Syndicate. That brings us to the other (more dramatic) side of Cowboy Bebop, in the power-hungry villain Vicious (Alex Hassell, from Suburbicon) who’s rising through the ranks of the mafia Syndicate. His entire thing is insecurity in his masculinity, which I have to admit I wasn’t very invested in. We’ve had too much of immature emotionally-stunted white men. Vicious’ wife is the femme fatale Julia (Elena Satine, from Revenge) whom he doesn’t love as much as he loves to have her around as a trophy. And oh, he also has a past with Spike. Everything with Vicious is on the nose (just look at the name) and feels over the top.

While it’s driven from bounty to bounty early on, Cowboy Bebop becomes more and more invested in the Syndicate and Vicious storyline as the season goes on. (Anime fans will know why.) That means the Netflix series is more enjoyable in the beginning, and gets more annoying as it approaches its end. It makes some frustrating and predictable choices in the endgame. Main characters survive thanks to plot armour. The Bebop crew don’t communicate properly with each other just so the TV show can set up a heroic turn of events. A minor character flips their loyalty just because they share gender with the victim. And because a character’s turn to the dark side isn’t seeded properly, it feels a bit unearned when it eventually happens.

Cowboy Bebop is much better in the emotional department when it takes a more cerebral albeit gimmicky approach. In one episode, an AI latches onto a character’s brain, in an attempt to recreate their consciousness. The character finds themself stuck in a time loop, forced to relive the same situation as the AI attempts to “break them down”. The episode really becomes this psychological exploration and a journey through their mind. It’s a bit like Inception where Leonardo DiCaprio saw Marion Cotillard as he remembered her — you’ll know what I mean when you see it.

I would’ve preferred if Cowboy Bebop was less serialised as a season-long story, and more episodic — simply because their individual adventures are more fun than the big-picture tale. Though yes, I’ll be the first to admit that any show trying to run for multiple seasons does need season-long character arcs too. The first season of Cowboy Bebop concludes about the midway point of the anime’s original run — I say original because Netflix recently re-licensed the anime in India, but the episode ordering is all messed up — which would give the Netflix series at least another season. Though it could easily go on for even more, given the late-game twist that (even anime fans won’t see coming and) sends Cowboy Bebop on an entirely different branch than the anime.

It’s intriguing enough — primarily because it’s more personal now — but if/ when Cowboy Bebop does return to Netflix for season 2, I know I will be tuning in for more bounty-hunting adventures. That’s what put a smile on my face. See you (soon) space cowboy!