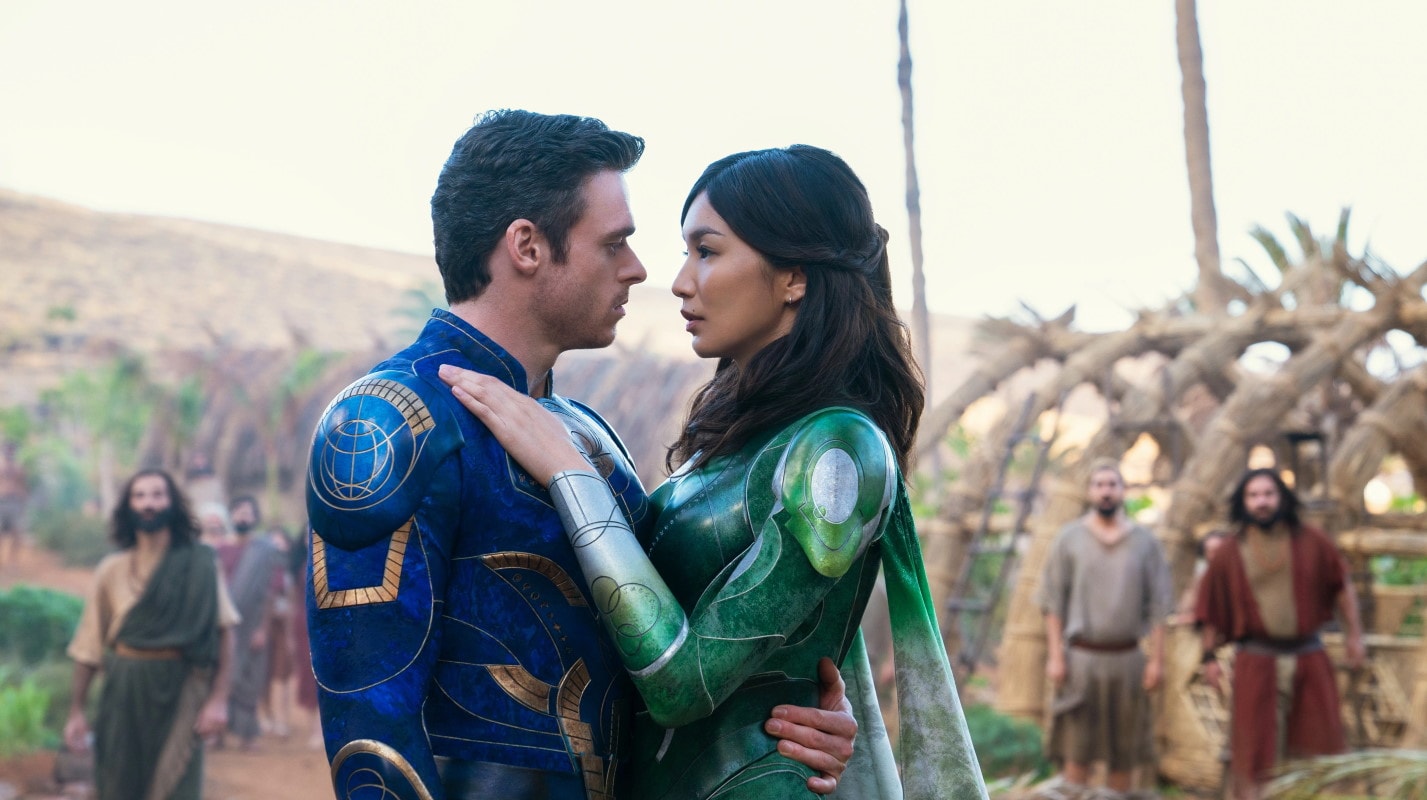 Eternals — out now in cinemas worldwide — has a lot to show. After all, it’s the second-longest Marvel Cinematic Universe movie of all time, with a 156-minute runtime (including credits), behind only the epic saga-concluding Avengers: Endgame. The Eternals ensemble is made up of 10 immortal beings, led by the likes of Angelina Jolie, Salma Hayek, Richard Madden, and Kumail Nanjiani. Its tale spans several millennia: from 5,000 BC Mesopotamia to present-day London, and 15th-century Spanish conquest to 400 AD Gupta Empire. There are lore and exposition dumps scattered throughout, but even that’s not enough. Eternals begins with a three-paragraph opening crawl — it’s like Star Wars but sadder — that tells us how the Eternals came to be, their chief enemy, and their purpose on Earth.

It’s just too much — and despite being two-and-a-half-hours long, Eternals buckles under the weight of the demands put on it. It’s like being thrown into Avengers: Age of Ultron without the knowledge of any of the previous MCU movies. To be fair, Marvel has taken on an ensemble project before: Guardians of the Galaxy. Except James Gunn had a talking tree and a snark machine as two of its five primary characters. Eternals has TEN human-looking characters whom we are all meeting for the first time. It’s an uphill battle for any writer-director, even one who has won Oscars for her filmmaking. Earlier this year, Eternals director Chloé Zhao won Best Picture and Best Director for her work on the Frances McDormand-led drama Nomadland.

Worryingly, Eternals doesn’t ever really feel like a Chloé Zhao movie. Though that may be because we’ve never seen a Zhao movie on this scale. Up until before Eternals, Zhao was renowned for delivering lyrical explorations of rural America, made with non-actors wherever possible. That made her work feel grounded, realistic, intimate, and akin to a documentary. Eternals is anything but. It’s a Marvel superhero movie about immortal beings. They are not relatable, the film features planet-sized giants, and it feels very much like a Marvel Studios production. Sure, Zhao carries over her love for shooting on location in the golden hour, Eternals has epic vistas and is beautiful to look at, and there is a tangible feeling to some of its settings. But all of that is superficial.

Zhao fails to bring the heart and soul she’s known for on Eternals — instead, she delivers a gigantic and gorgeous movie with nothing to say, something that Marvel gets blamed for all too often.

The Eternals opening crawl informs us that the titular beings were created by Arishem, the Prime Celestial. Think of Arishem as a supergod who only deals in planet-level talks — it makes sense given Celestials are the size of planets themselves. Arishem dispatched our Eternals to protect Earth from the Deviants, evil ugly-looking beasts who are essentially apex predators. They were instructed not to interfere in any other human conflict. Eternals arrived on our planet over 7,000 years ago and have since been living in secret, having gone their separate ways centuries ago due to a tragedy, as more expository narration tells us.

There’s Sersi (Gemma Chan, from Humans) who can transmute any inanimate matter and is living as a Natural History Museum employee in London. We have Ikaris (Richard Madden, from Game of Thrones) who is basically Marvel’s Superman given he can fly and shoots beams out of his eyes. Kingo (Kumail Nanjiani, from Silicon Valley), who can fire blasts from his hands, has chosen the peculiar disguise as Bollywood’s biggest movie star. Sprite (Lia McHugh, from The Lodge) can cast life-like illusions and has the appearance of a 12-year-old. Phastos (Brian Tyree Henry, from Atlanta) is a tech wizard.

Makkari (Lauren Ridloff, from The Walking Dead) is basically Marvel’s The Flash since she has super speed. Druig (Barry Keoghan, from Dunkirk) can take over human minds at scale. Gilgamesh (Don Lee, from Train to Busan) is the strongest of the Eternals with his fist capable of stopping nearly anything. Thena (Angelina Jolie), who gives the Goddess of War her name, can summon weapons out of thin air. That leaves Ajak (Salma Hayek) who has healing powers. More importantly, Ajak leads the group as the “Prime Eternal” (she’s like a mother for the rest) and can talk to Arishem.

Eternals spends its first half or so jumping across time to show us the group’s journey on Earth — the big events they were part of, what led to their split, and the team slowly coming back together in present day as the old Deviant threat re-emerges. It might be watchable, but it’s not remotely interesting. Frustratingly, Eternals never really takes us inside these immortal yet fallible beings.

All You Need to Know About Marvel’s Eternals

Naturally, as with any film that has so many characters, some of the Eternals ensemble is more “main” than others. Sersi and Ikaris get the most amount of screen time, fitting Chan and Madden’s top billing. But their “millennia-spanning love story” is so perfunctory, it happens in one scene and comes out of the blue. Jolie is wasted in a one-note role that renders her star power useless for all but one scene. And Hayek, who was concerned Marvel would offer her a grandmother role, ends up more or less doing that with her truncated role as a mother to the Eternals.

One major character takes a break from the third-act big fight — no one talks about their absence even when they magically return for the conclusion. Kit Harington, Madden’s Game of Thrones co-star, has a tiny role that is essentially a backdoor pilot for his future MCU adventures.

Even the likes of Phastos and Makkari are essentially relegated to the side-lines. This feels like an additional betrayal given Eternals has been billed as Marvel’s most diverse movie to date. (Yes, I know it’s a very low bar and that it should’ve happened sooner.) Phastos and Makkari are respectively the MCU’s first gay and deaf superheroes, but their presence is minimal and fleeting. I was genuinely surprised to see that India’s censor board didn’t cut the gay kiss though, something they have been guilty of in the past. There’s even a brief PG-13-friendly sex scene, a first for Marvel.

Eternals also suffers from Marvel’s villain problem. The Deviants are not at all interesting — the fact they cannot speak for the most part contributes to that. Heck, some of them don’t even get names, despite appearing repeatedly. One doesn’t appear until three-quarters into the movie.

The only refreshing aspect is the comic relief provided by Kingo and his camera-toting valet Karun (Harish Patel, from Gunda). Kingo seems to be the only one with a sense of humour amongst the Eternals — and Nanjiani and Patel infuse life into the film. It’s frankly amazing how often Patel ends up stealing scenes in a movie filled with stars. That’s likely also because the others, except Kingo, are stuck playing gods with the weight of the universe on them.

Thanks to the duo, Eternals also break the fourth wall of sorts as Karun follows Kingo everywhere with a camera, allowing for some chuckles and over-the-top nonsense to cut through the dramatic tension. And it’s through Kingo and Karun that Zhao gets closest to any kind of incisive commentary — I can’t say if it’s intended, but some lines in Eternals cut deeply into Bollywood. It made me wonder who’s responsible for such insight in the writing committee.

The humour also comes from characters referencing other MCU characters and events — Doctor Strange (Benedict Cumberbatch) gets a nod — and even jumping into its rival DC Comics, with a couple of jokes comparing Eternals‘ characters to Superman and Batman’s butler Alfred Pennyworth.

From Eternals to Dhamaka, What to Watch in November

Eternals‘ action sequences are nothing special either. If you were hoping that Zhao’s love for lingering takes would result in longer stunt shots, prepare to be disappointed. It’s cut and edited pretty much like any Marvel movie in fact. Award-winning filmmaker Lucrecia Martel revealed that she turned down Marvel on Black Widow after they offered to “take care” of the action sequences. I might be totally wrong here, but it seems like Zhao isn’t responsible for the big set pieces. Yes, there are some flashes of style, using the unique abilities and showcasing the otherworldly nature of their superpowers in a fun way, but it’s rare and forgettable.

The most promising nugget that Eternals offers is how the team is split internally on values — they don’t see eye to eye on a lot of topics, which is what caused them to go their own separate ways. (It also contributes to Eternals‘ big twist, which I won’t get into.) This is expressed most clearly through Druig, who as he says could easily resolve all of mankind’s disputes in a blink of an eye. But then humans wouldn’t learn and develop, the counter-argument goes. Being asked to stand by when you’ve god-like powers can weigh heavily on anyone’s shoulders. Eternals needed to better expand along these lines — but it doesn’t know how to. In lieu, it just gives us dollops of exposition, characters standing around and arguing, and little forward momentum or narrative urgency.

With Eternals, the MCU’s gods take centre stage. Yes, Thor (Chris Hemsworth) has been around since the beginning, and we had Ego (Kurt Russell) — a Celestial — pop up in Guardians of the Galaxy Vol. 2. But Marvel has never gone in for the creation myth until now. The Disney+ series Loki briefly touched upon the lack of free-will in the MCU, and Eternals pushes deeper into that. Though with very mixed results. Eternals posits that the 10 have shaped human history. That’s fine. But by saying that the Eternals are responsible for humans’ worst impulses and calculations, it’s taking away the evil that humans themselves are capable of. Humans are their own worst enemies — we don’t need gods playing dice to decide our behaviour and our fate.

No matter who was hired for the job, Eternals was always going to be an ambitious movie. Despite the lengthy runtime, cramming nearly a dozen characters and an epoch-spanning saga seems overambitious. Zhao acknowledged this: “It could be longer! You know, it’s ten characters, the Celestials, and 7,000 years. There’s a lot going on.” Weirdly though, Eternals feels like it’s thinly plotted for most of its 156 minutes, before being thrown into the deep end. That tilts the balance and sinks the ship. Zhao unfurls the story of the Eternals on an epic and elaborate stage, though that ends up being a double-edged sword. We get a grandiose mythology about the creation of the (Marvel) universe, alongside backstories for its titular immortal beings. But we are never really given the time to understand them, care for them, or connect with them.

Eternals is out Friday, November 5 in cinemas worldwide. In India, Eternals is available in English, Hindi, Tamil, Telugu, and Kannada.