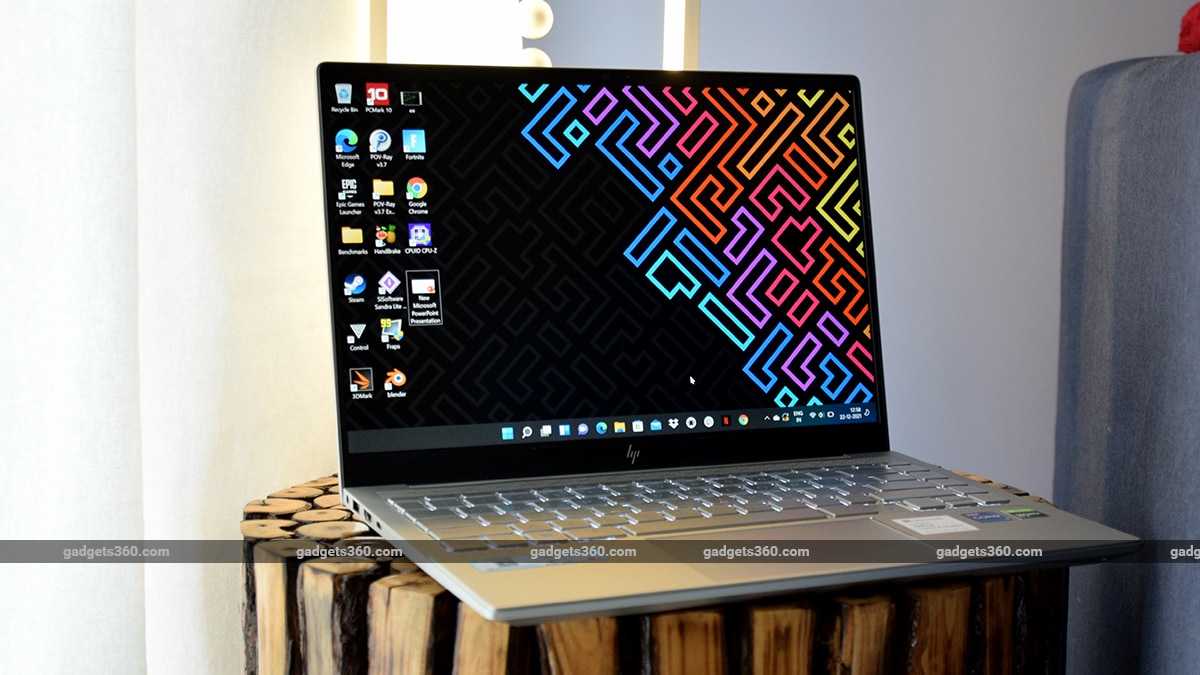 HP refreshed its Envy line of premium Windows Ultrabooks back in August and the Envy 14, which we have with us today, is one of the fully loaded variants. Available in both 14-inch and 15-inch screen sizes, the new Envy series promises powerful performance in premium and highly portable bodies. The 2021 refresh gets Intel’s 11th gen Core CPUs and a tweaked design, making it a good contender against rivals such as Dell’s XPS series. The pricing of the HP Envy 14 also puts it in Apple’s MacBook Pro (M1) territory.

It’s time to find out if this ultrabook should be on your radar this shopping season.

The industrial design of the HP Envy 14 has grown on me in the time I’ve been testing it. This laptop is only available in a single silver finish, which covers most parts of the body, except for the bezel around the display. The sharp angles throughout the laptop, including on the rubber feet underneath, lend it a distinctive look. The aluminium chassis is sturdy which makes the lid and base feel rugged.

For a 14-inch laptop, the HP Envy 14 offers a decent selection of physical ports. You get two USB 3 (Gen1) Type-A ports with ‘HP Sleep and Charge’ functionality on both, HDMI 2.0, a Thunderbolt 4 ( Type-C) port, a microSD card slot, a DC charging port, and a headphone jack. You can power and charge the laptop via the Type-C port too, if you don’t have the supplied charger with you. The single hinge for the display offers good torsion and the lid can be pushed back comfortably. Opening the lid when closed can be a little tricky though since the provided groove isn’t deep enough to easily grip it with your thumb or finger.

The chiclet keyboard keys are well spaced and comfortable to type on. You get three levels of white backlighting, which illuminates the keys pretty evenly. There’s a fingerprint sensor in place of the right Ctrl key. The palmrest area is spacious and you even get a generously sized glass trackpad in the middle.

The display is a bright 14-inch IPS panel with a full-HD+ resolution and a 16:10 aspect ratio. The design looks modern too, thanks to slim borders on three of its four sides. The perforated vent above the keyboard is for airflow, and the stereo speakers are placed on the bottom of the laptop, one on each side. There’s a much larger vent there too.

The HP Envy 14 is built around Intel’s Evo platform which is a set of guidelines for features, performance and efficiency. The variant that I’m testing features an Intel Core i7-1165G7 CPU with integrated Intel Iris Xe graphics, 16GB of soldered DDR4 RAM, a 1TB PCIe NVMe SSD, and a discrete Nvidia GeForce GTX 1650 Ti GPU with Max-Q optimisation. It’s a fully-loaded machine with powerful components across the board. The stereo speakers in the Envy 14 are from Bang & Olufsen. There’s a 720p webcam with a software-based camera disable feature for privacy, which can be toggled with one press of a dedicated button on the keyboard. Wireless connectivity includes Wi-Fi 6 and Bluetooth 5.

HP is still shipping the Envy 14 with Windows 10 out of the box, but you can upgrade to Windows 11 during the initial setup process (though you might want to read the rest of this review before choosing to do so). You get the usual trial programs preinstalled, along with a full license for Microsoft Office Home & Student 2019. There are plenty of apps from HP too for tweaking the sound, display, battery profiles and system tuning. There’s a neat little utility called HP Enhanced Lighting which creates a virtual ring light on the screen to help brighten your face during video calls.

As a daily workhorse, the HP Envy 14 chugged along very well in the few weeks I used it. I noticed a software bug on the review unit that HP sent me, which caused it to boot loop when trying to update to the latest firmware. This cropped up on a replacement unit that HP sent as well. Heading into Windows recovery and uninstalling the last feature update fixed this temporarily, and it seems to be linked to a conflict between the HP Support Assistant app and Windows 11. If you have bought an Envy 14 or are planning to buy one, I’d suggest updating the firmware before you switch to Windows 11, to hopefully bypass this bug.

With casual use, which was mostly Web pages and apps in Chrome in my case, the HP Envy 14 ran cool and quiet. I did occasionally hear fan noise when things were running in the background, like an update in Steam, but overall, this device was comfortable to use on my lap. Despite its compactness, it feels a bit heavy at a little over 1.5kg. However, the comfortable keyboard and bright and sharp display made work and play very enjoyable. The stereo speakers sound rich and detailed too. The built-in webcam is decent if you have good light around, but footage gets very grainy in low light.

The HP Envy 14 performed very well in benchmarks too. It managed strong scores of 5,548 in PCMark 10 and 7,790 in 3DMark Fire Strike. The laptop’s SSD performance in particular was quite impressive too. Sequential read speeds averaged around 2.65GBps, while random write speeds were still a solid 1.75GBps.

The Envy 14 isn’t designed to be a gaming laptop but the dedicated Nvidia GPU will allow you to play games like Fortnite at high settings with smooth framerates. Heavier titles were still playable, such as Remedy’s Control which ran at the ‘High’ quality preset at 1080p, but the frame rate in this game was not the smoothest, with an average of around 26fps. Dropping the quality settings did improve this. I’m happy to note that while charging this laptop or doing anything intensive, it’s only the bottom that gets hot, and the heat isn’t felt much on the keyboard or the palmrest.

The HP Envy 14 packs in a 4-cell, 63.3WHr battery which HP claims can last for up to 17.5 hours of video playback. I didn’t watch anything for that long a stretch, but with mixed usage which included working on Google Docs in Chrome, Slack, streaming videos, and a few breaks in between, I was generally able to get about 8-9 hours of runtime on a single charge, which I think is very good for a Windows laptop of this size. What I also liked was that I didn’t have to resort to using the battery efficiency profile in Windows 11 in order to achieve this. The Battery Eater Pro score was surprisingly nothing to shout about, as the laptop lasted for just 1 hour, 22 minutes in this resource-heavy test.

The HP Envy 14 variant (EB0021TX) that I tested was priced at Rs. 1,24,999 at the time of this review. It’s expensive, sure, but compared to its rivals, the Envy 14 does offer slightly better value. The Dell XPS 13 for instance is also priced the same, but with half the SSD capacity and no discrete GPU. Then there’s the Lenovo Yoga Slim 7i Carbon, another Ultrabook based on Intel’s Evo platform, which costs less than the Envy 14 and has nearly the same specs plus a QHD display, but again, no GPU.

I think the HP Envy 14 strikes a good balance of portability, performance, and battery life, making it a very good Ultrabook to consider. It’s not possible to directly compare it to the MacBook Pro 13 (M1) since both of them run on different software platforms and CPU architectures, but if you’re looking for a Windows-based alternative, the Envy 14 is a strong contender. A few things to keep in mind are that it is a bit heavy and it takes some effort to open the lid. The quality of the webcam is also a bit disappointing.

Overall, the HP Envy 14 should be near the top of your list if you’re looking for a premium Ultrabook that can juggle work and (some) play, while still lasting a full work day on a single charge.