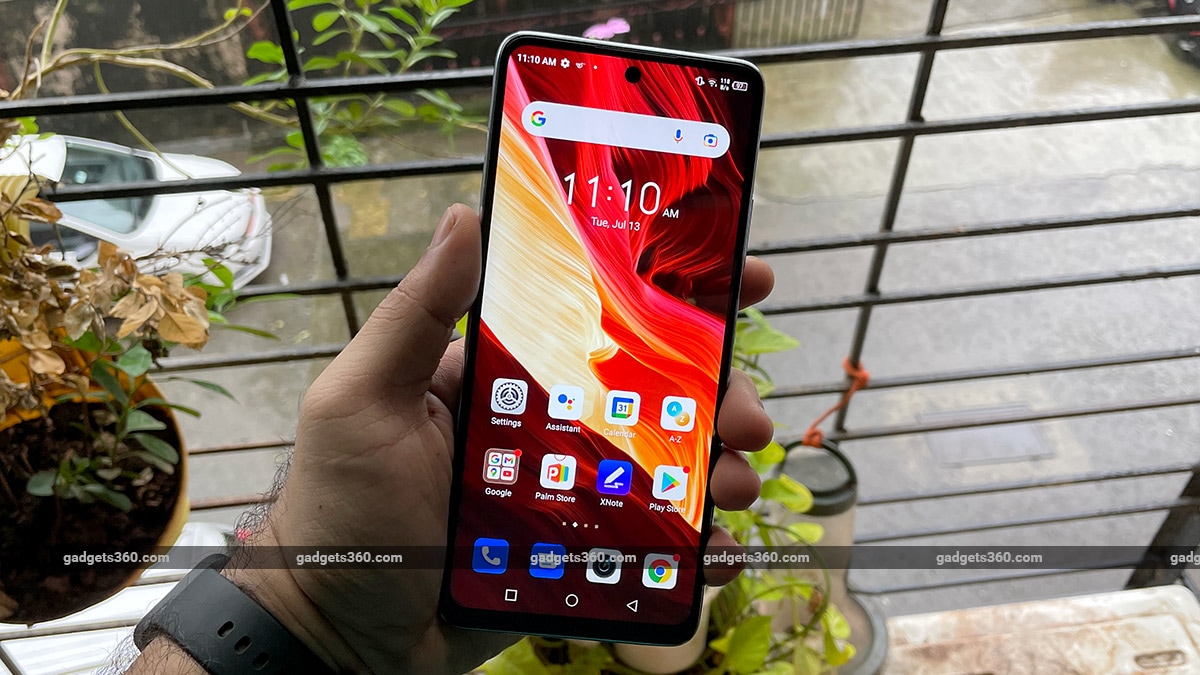 Infinix has made it to the big leagues, literally. The company’s new smartphone, the Note 10 Pro, sports a massive 6.95-inch display which is among the biggest I’ve tested on a smartphone. The big body also packs in a sizeable 5,000mAh battery and a capable processor. So has Infinix managed to find the right ingredients for the Note 10 Pro? I put this smartphone to the test to find out.

The Infinix Note 10 Pro (not to be confused with the Redmi Note 10 Pro) is priced at Rs. 16,999 for the lone 8GB RAM, 256GB storage configuration. It is available in three colours, with rather unusual names: 7-degree Purple, 93-degree Black, and Nordic Secret.

The Infinix Note 10 Pro is a good-looking device and has won an IF Design Award for 2021. As I said right at the start, the Infinix Note 10 Pro is a huge smartphone with a massive 6.95-inch display. Don’t worry, it isn’t quite tablet-sized; it has a 20.5:9 aspect ratio which makes the smartphone tall and narrow. You can hold it in one hand but reaching the top of the display with that thumb would be impossible. Infinix has kept the bezel size down on the sides, but the bottom chin is quite thick. There’s a big camera hole at the top-centre of the screen. Given the size of the hole, some people might find it distracting.

The earpiece is quite thin and is sandwiched between the display and the frame of the Infinix Note 10 Pro. Interestingly, this smartphone also has a front-facing flash that is neatly hidden right next to the earpiece. Infinix has gone with a side-mounted fingerprint scanner, which is now a common sight on smartphones priced at around Rs. 15,000. The fingerprint scanner and volume buttons are positioned a little too high in my opinion.

The Infinix Note 10 Pro in the Nordic Secret finish

Infinix has made the frame of this phone out of plastic. It is curved on the sides and flat at the top and the bottom. The left side has the SIM tray, while the 3.5mm headphone jack, loudspeaker, and USB Type-C port are at the bottom. The top is blank. The rear quad-camera setup is in the top left corner. This module has a two-step design that reminds me of Vivo’s recent smartphones. I had a Nordic Secret unit for this review, and it has an iridescent finish at the back. Infinix has given the Note 10 Pro a frosted look, which also makes it smudge-resistant.

The Note 10 Pro has a 5,000mAh battery which is a healthy capacity. There are smartphones that pack bigger batteries in smaller bodies, but I’m not complaining. In the box, you get a 33W charger.

Moving over to the specifications, I quickly spotted something familiar – the MediaTek Helio G95 SoC. This processor powers a lot of recent smartphones in the Rs. 15,000 to Rs. 20,000 price segment, including the Poco X3 (Review), Realme 8 (Review), and Redmi Note 10S (Review) to name a few. This processor is touted as great for gaming. Infinix has gone with 8GB of RAM and 256GB of storage, which is quite generous for this price level. I do think that Infinix could have offered a 6GB RAM variant like it does in international markets. This could have helped drop the starting price of the Infinix Note 10 Pro into the sub-Rs. 15,000 segment to scoop some consumers away from the competition.

You get a 6.95-inch full-HD+ LCD display with a 90Hz refresh rate. Infiinix has also thrown in a stereo speaker setup with DTS. Budget smartphones don’t usually have stereo speakers, but this capitalises on the big screen for entertainment.

The Infinix Note 10 Pro has two Nano-SIM slots and a dedicated microSD card slot for storage expansion. I think the 256GB of onboard storage is plenty, but if you want to haul more data around, you can. The Note 10 Pro features dual-band Wi-Fi and Bluetooth 5, and dual 4G with VoLTE and VoWiFi.

In terms of software, it runs XOS 7.6 on top of Android 11. The smartphone was running the March Android security patch which is a little dated at this point. You get a number of preinstalled apps on the device such as Facebook, Messenger, Instagram, and a few of Infinix’s own apps. Palm Store is an alternative to the Google Play Store. Similarly, AHA Games has a library of games you can download from to play. I did get promotional notifications from these and a few other apps from time to time. I would recommend uninstalling or disabling the apps you won’t use to prevent being spammed.

Infinix has baked some cool features into XOS 7.6 such as the Video Assistant. This lets you swipe in from the side while watching a video in an app such as YouTube to do various things. The coolest feature here is called “Play in background”, and it lets you play the audio from YouTube videos even with the screen off. Other Video Assistant features include blocking incoming calls and notifications, and taking screenshots and screen recordings. Thunder Back is another XOS feature and can be enabled by double-tapping the power button. This allows you to quickly put the current app in picture-in-picture mode in a corner so you can see another app running in the background.

The Infinix Note 10 Pro offered good performance and it never slowed down during the review period. Apps launched quickly and I did not have to wait for long. Multitasking was easy and I could switch between multiple apps very easily. I found the fingerprint scanner to be quick, and it never needed more than one attempt to unlock the device.

The Note 10 Pro’s display has good viewing angles and the speakers do offer stereo sound. These speakers aren’t balanced though, and the bottom-firing one is louder than the earpiece. The Note 10 Pro is loud but it does sound tinny at higher volumes.

The side-mounted fingerprint scanner is quick to unlock the phone

In AnTuTu, the Note 10 Pro managed to score 359,128 points. It also scored 510 and 1,672 in Geekbench 5’s single-core and multi-core benchmarks respectively. The Note 10 Pro managed 17fps and 28fps in GFXBench’s Car Chase and Manhattan 3.1 graphics tests respectively. These benchmark scores are higher than those of the Poco X3 and Realme 8 smartphones, which sport the same processor.

I played Battlegrounds Mobile India (BGMI) on the Infinix Note 10 Pro and it defaulted to the HD preset for graphics and High settings for frame rate. The game was playable at these settings and I did not notice any lag or stutter. After a round that lasted 24 minutes, I noticed an 8 percent drop in the battery level. The phone was also slightly warm to the touch.

In our HD video loop test, the Note 10 Pro went on for 15 hours and 35 minutes, with the screen refresh rate set at 90Hz. This is slightly on the lower side, and we have seen the competition clock a couple of hours higher in the same test. Infinix supplies a 33W charger in the box, which took the smartphone to 47 percent in 30 minutes and to 83 percent in an hour. Charging the phone completely took about an hour and a half.

The Note 10 Pro sports a quad-camera setup at the back consisting of a 64-megapixel primary camera, an 8-megapixel ultra-wide-angle camera also capable of macros, a 2-megapixel depth sensor, and a 2-megapixel black-and-white camera. For selfies, it has a 16-megapixel shooter at the front. The camera app is pretty straightforward and easy to use. It has AI scene detection that is quick to detect what the phone was pointed towards.

Photos taken with the Infinix Note 10 Pro in the daytime had good details and decent dynamic range. Objects at a distance were recognisable and text was also legible. Ultra-wide-angle photos look decent as is but these weren’t as crisp and detailed as those taken with the primary sensor.

Close-up shots were better with a natural looking depth effect for the background, while the subject was sharp. Portraits had good edge detection but I couldn’t adjust the level of blur before taking a shot. The Note 10 Pro uses its ultra-wide angle camera for maros, and managed sharp shots with good details. The resolution is higher than what you’d get from phones with dedicated macro cameras

Low-light photos were strictly average, and the phone couldn’t capture darker areas in a scene accurately. The Super Night mode delivered much brighter output with better details in the shadows. A downside of this mode is the 5-6 seconds it takes to capture a shot.

Selfies shot with the 16-megapixel front shooter in daylight were good and the phone could also capture portrait selfies, blurring the background. Low-light selfies weren’t the best, and the Note 10 Pro crushed blacks by bumping up contrast in darker areas. The front-facing flash does help when shooting in dark environments.

Video recording tops out at 4K 30fps for the primary camera and the selfie shooter. Footage shot using the regular video mode wasn’t stabilised at 4K or 1080p. This led to shaky footage if it was recorded while walking around. In low light, the footage wasn’t too dark but lacked stabilisation. The Note 10 Pro does have an Ultra Steady mode for stabilisation but it restricts the video resolution to 1080p 30fps.

After using the Infinix Note 10 Pro for a week, I can say that while the size of the device might not appeal to everyone, it works well for media consumption. To add to that, the stereo speakers offer good sound output, though a bit tinny. I don’t have any complaints with respect to performance, since the phone never really showed any sign of slowing down thanks to the powerful SoC and 8GB of RAM.

Infinix could have offered a lower specced variant for Note 10 Pro to make it accessible at a lower price point. The cameras are average and the lack of stabilisation for video recording could be a deal-breaker for some people. The Poco X3 (Review) could be an alternative to the Infinix Note 10 Pro, and if you want a future-ready device with 5G, the Realme Narzo 30 Pro 5G (Review) is also worth considering.