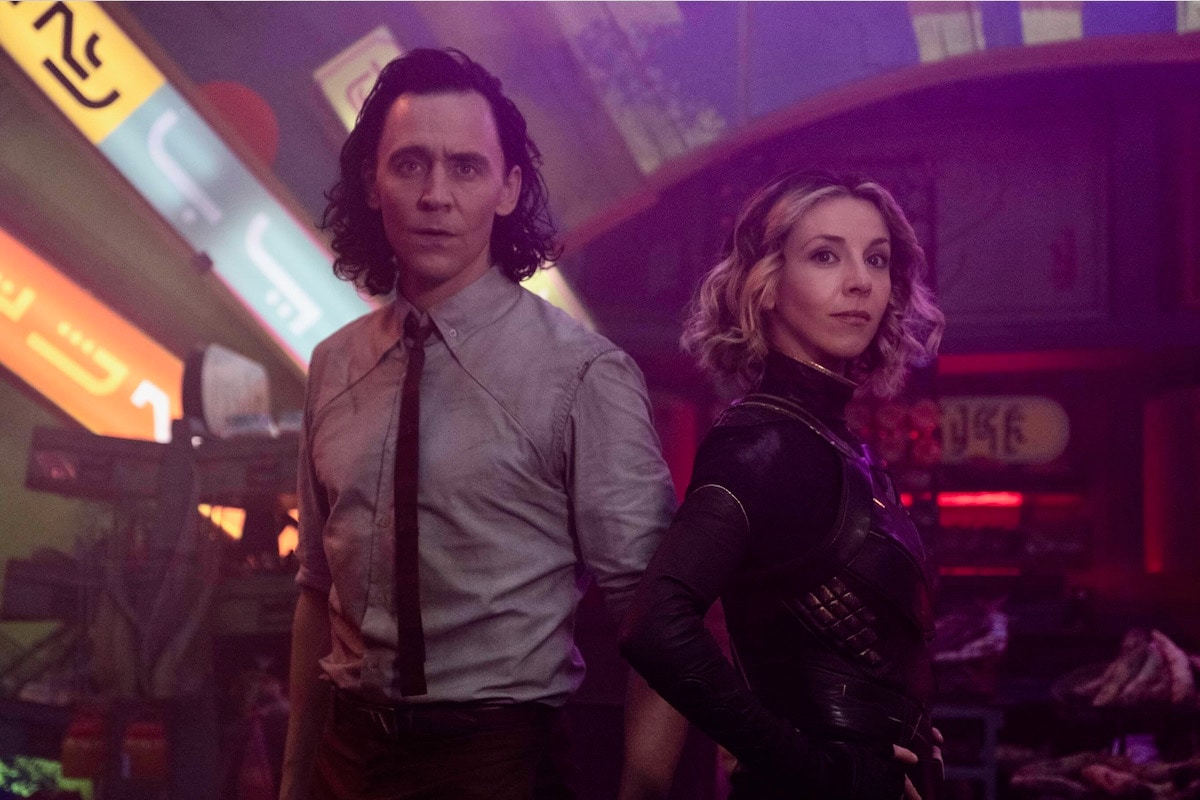 Loki episode 3 — out now on Disney+ and Disney+ Hotstar — felt very much like an instalment of The Mandalorian. Some of that was down to the visuals, with the vast empty (albeit purple-hued) Lamentis-1, the deserted mining town and acres of loose gravel, akin to the landscapes that we regularly see on the Star Wars series that harkens close to the franchise’s Western roots. There’s also the matter of the guards we see checking tickets to the evacuation vessel on Lamentis-1, who are essentially Marvel’s version of Stormtroopers. And then there’s the setup of Loki episode 3 — Loki (Tom Hiddleston) and Sylvie (Sophia Di Martino) trying to escape a desperate situation — that can be repeated ad infinitum should Loki end up being an ongoing series.

All this has been enabled by Loki‘s gimmick of Sylvie using apocalyptic events to conceal her actions, which also results in a cliffhanger of sorts at the end of Loki episode 3 — it’s also quite short at 36 minutes that you may not have realised in all the hullaballoo until it abruptly ends. Sure, in big picture terms, Loki and Sylvie will be okay. But how will they get off Lamentis-1 now that the time-and-space travelling device TempPad is broken and the Ark spaceship has been destroyed?

Before all that, Loki episode 3 — titled “Lamentis”, directed by Kate Herron, and written by Ms. Marvel head writer Bisha K. Ali — opens by telling us about Sylvie’s plans that Loki was so interested in, back in Loki episode 2. We see Sylvie and Hunter C-20 (Sasha Lane) in comfortable Hawaiian clothes at a bar somewhere, chatting as if they have been friends for years. The sly Sylvie has questions for her though — how many people are guarding the Time Keepers, and how do I find the elevators (they are gold) — which puts C-20 off and makes her realise that she doesn’t actually know Sylvie. Loki episode 3 then reveals that Sylvie has “enchanted” C-20 and all this is happening inside her mind, sort of like on the astral plane, in Marvel terms.

Loki episode 3 then jumps to right where we left off with the Loki episode 2 cliffhanger, as Sylvie arrives in the Time Variance Authority to carry out her plan: kill the Time Keepers. That explains the major distraction she caused in Loki episode 2, which has taken away most of the TVA guards from their homebase. As Sylvie makes her way, she gets the jump on a TVA Hunter before realising her magic doesn’t work here. She then evaporates or knocks them out with their own weapons. Loki, who followed Sylvie through the time door in Loki episode 2, also arrives in TVA. He grabs his knives from the locker nearby and then confronts Sylvie. Their knife fight is interrupted by Ravonna Renslayer (Gugu Mbatha-Raw) before Loki saves them by teleporting away.

In Loki, Marvel’s Favourite Villain Does Workplace Comedy by Way of David Fincher

Sylvie is annoyed and immediately tries to jump back using the TemPad but discovers that it’s out of juice. She can’t use it anymore until it’s recharged. Loki takes it off her hands and hides it by using his magic, only for Sylvie to point out that he needs her to know how to recharge it. Meanwhile, they are stuck on this new purple-hued moon, which Loki episode 3 reveals to be Lamentis-1 in 2077. A nearby planet is about to crash into it and will kill all life on Lamentis-1. That makes sense, for all the places that Sylvie frequented were apocalypses, allowing her to hide herself from the TVA. Sylvie wants to kill Loki for stranding them, but he calms her down and proposes a truce.

As they make their way to a nearby mining town on Lamentis-1, Loki wonders why she doesn’t like being called Loki or Variant. Loki is not a name she identifies with anymore — that means it’s her given name anyway — and has since adopted the alias “Sylvie”, a name that has ties to the Loki mythology in the Marvel comics. But Sylvie was never a Loki variant in the comics. She also seems to have a very different background on Loki, though to be fair, Loki episode 3 tells us very little. But enchantment being her primary power does mean Sylvie could end up being called the Enchantress, as in the comics.

Loki and Sylvie arrive at a hut of sorts that might give them the power to recharge the TemPad. Sylvie opts for a more confrontational entrance which doesn’t work for her as the woman inside (Susan Gallagher) blows her away with a sonic weapon. Loki tries to be cleverer. He first talks her down and then transforms into her late husband — having seen a photo of them through the window — but the woman blows him off too. Her husband was never as sweet, she shouts at Loki. She asks what the two devils want from her, before pointing them to a train station at the edge of town that will take them to the Ark. But getting tickets won’t be easy, she notes. With a combination of each other’s magic though, they sneak onto the train.

Inside, they have the first heart-to-heart as they talk about their respective mothers, how they were adopted, and love. Loki talking about his mother gets to Sylvie, because she doesn’t remember hers. The conversation on Loki episode 3 then moves to past lovers — which confirms that Loki is bisexual, though it’s obliquely hinted at, not said. They then decide to rest, given they’ve got more disguising and stealing to do later. Sylvie wakes up to discover Loki without his guard-disguise and singing in Asgardian openly. He’s drunk. She notices a strange man leave the compartment, and she can tell that someone is going to show up. Loki thinks Sylvie is being paranoid, who points out that it’s thanks to the “omniscient fascists” — she means the TVA.

Sylvie’s concerns turn out to be real, as a bunch of guards show up to demand their tickets. The drunk Loki tries to conjure up tickets but fails, pushing the duo into a fight. It culminates with Loki being thrown out of the train, and Sylvie jumping after him because of the TemPad. She puts a knife to his throat, prompting Loki to bring out the hidden TemPad — it has broken. Sylvie reprimands him for being drunk, Loki says he’s hedonistic in response. She is also hedonistic, Sylvie protests, but never at the expense of the mission. What mission, Loki scoffs, you can’t beat the TVA. Sylvie is really angry at Loki though, lets out a scream, and then sits on a nearby dirt mound, dejected that they are going to die on Lamentis-1. Why don’t they try to get on the Ark and make sure it takes off, Loki wonders.

With a new plan in place, Loki and Sylvie begin the long walk to the Ark. Loki wants to know how her enchantment works. He’s told her so much but he doesn’t know anything about her. Sylvie terms it tactical advantage, but Loki protests that he wants to trust her. Pressed, Sylvie finally explains what enchantment entails — it’s really about how strong someone’s mind is — which leads to an accidental revelation. Before C-20 joined TVA, she was a regular person on Earth. That’s huge, more for Loki and the audience anyway, Sylvie just assumed he knew. Everyone in the TVA is a variant like them, which shines a new light on how we see Mobius (Owen Wilson), Ravonna, and the rest.

As Loki and Sylvie get to the Ark — the Loki episode 3 production design switches to include a lot of neon here — the spaceship is about to take off and Lamentis-1’s annihilation is imminent. Loki and Sylvie try to get through the guards, but it’s all to no avail as the Ark is hit by planetary debris and destroyed in front of them. Loki just stands there taken aback, while Sylvie walks away. Loki episode 3 leaves us on a cliffhanger (like the episode before it), as Bonnie Guitar’s “Dark Moon” plays over the credits.

Loki episode 3 is now streaming on Disney+ and Disney+ Hotstar. New episodes release every Wednesday around 12:30pm IST/ 12am PT.