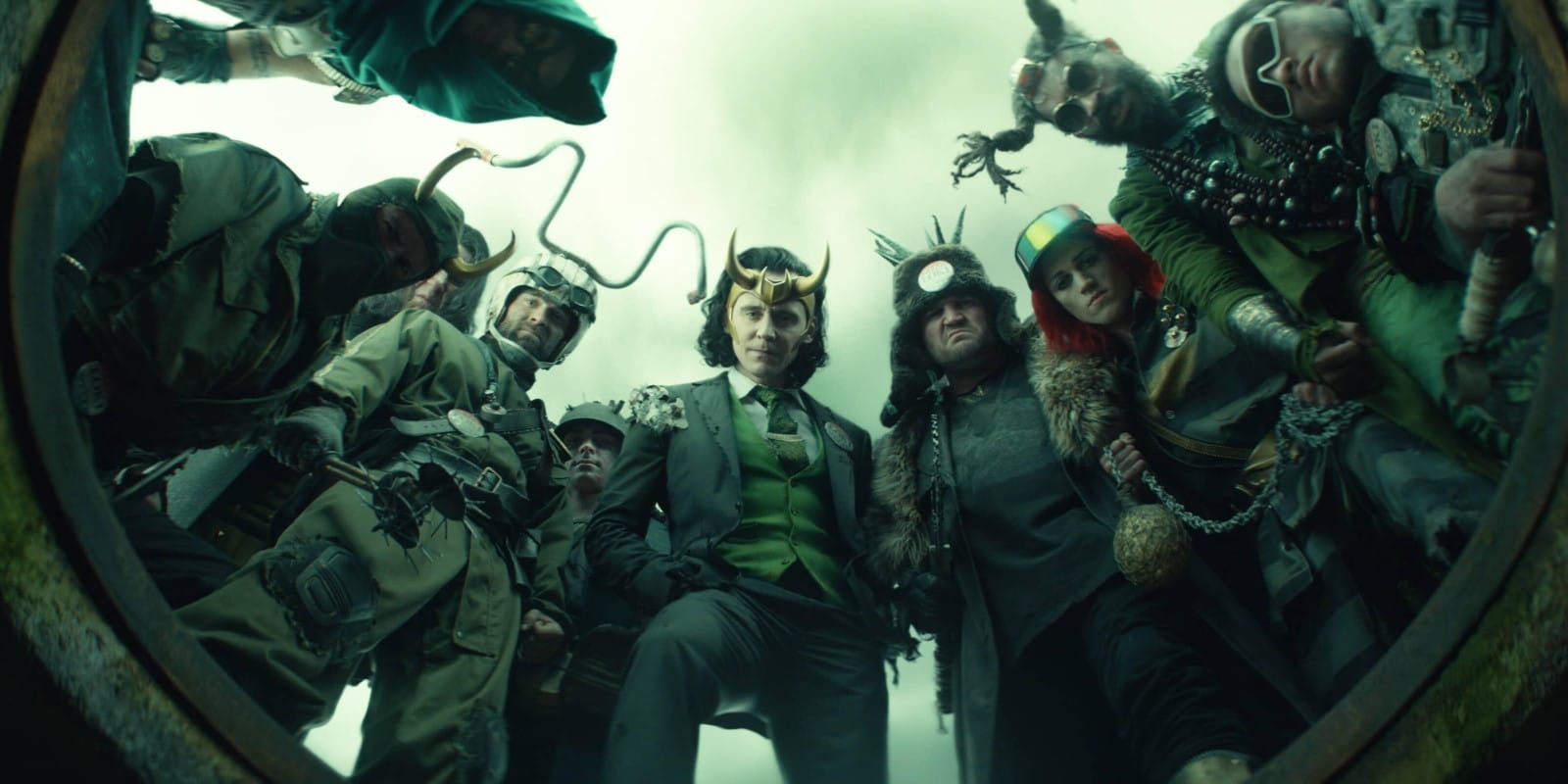 Loki episode 5 — out now on Disney+ and Disney+ Hotstar — set up the end of the new Marvel series, and possibly, the future of the Marvel Cinematic Universe. As we head into the season finale, Loki episode 6, due next Wednesday, Loki episode 5 was naturally a table-setting episode in some ways. That’s fitting, for so much of it took place in a vast purgatory called The Void. There, we were introduced to a new Marvel villain, the dark purple cloud mass known as Alioth, that consumes everything it touches. Per Sylvie (Sophia Di Martino), it’s hiding the originators of the Time Variance Authority. Though it might end up being more too, given Alioth has ties to the multiverse — a key component of MCU’s Phase Four — and Kang the Conqueror, the villain in Ant-Man and the Wasp: Quantumania.

Additionally, the penultimate episode of Loki season 1 confirmed that the alligator from the Loki episode 4 post-credits scene was in fact, an alligator Loki. “Don’t question it,” as Loki says deep into Loki episode 5. There were a lot of funny asides and moments thanks to the alligator Loki, alongside further jabs and teases for what else other Lokis — whom we met inside The Void — have been up to in their lives. The Kid Loki (Jack Veal) killed Thor. Classic Loki (Richard E. Grant) became a recluse. There’s even a President Loki (Tom Hiddleston). Loki episode 5 had Easter eggs too, with an interesting one being a Mjolnir and a shrunken Thor in a bottle buried in the earth in The Void.

Loki episode 5 — titled “Journey Into Mystery”, directed by Kate Herron, and written by Tom Kauffman — began with a stylistic stroll through where we left off in Loki episode 4, with the camera spinning and drifting through the TVA, the golden elevators and into the Time Keepers’ chamber, and then beyond into The Void, a desolate and dreary wasteland where Loki (Hiddleston) is now stuck. The scene won’t make much sense if you haven’t seen Loki episode 4 post-credits scene, as Classic Loki tells Loki to run from Alioth, saying they are his lunch.

Back at the TVA, having decided to spare Ravonna Renslayer (Gugu Mbatha-Raw), Sylvie wants her to spill the beans. But the TVA judge claims she’s as in the dark as Sylvie is — and wants the truth as much as Sylvie does. Ravonna then reveals that branched timelines aren’t rest, they are more like transferred to place where they can’t continue growing. That’s The Void, somewhere at the end of time. Nothing ever comes back from the void, Ravonna says, but she is willing to help Sylvie.

Loki-Simpsons Crossover The Good, The Bart, and The Loki Announced

Loki episode 5 jumps back to The Void, where a bemused Loki demands to know the truth of the place. Alioth is a living tempest, Classic Loki says, before summarising it in an allegory: “We are in a shark tank, Alioth is the shark.” All the other Lokis were arrested and pruned too. Loki wonders why Kid Loki is wearing the horns and why he gets so much importance, to which he retorts that he killed Thor.

And we are back at the TVA as Ravonna and Sylvie look to Miss Minutes (voiced by Tara Strong) to help with their new quest. Sylvie realises that you can’t create nexus events in The Void, which means they must get to the end of time to save Loki. Ravonna plays along but she’s really just stalling for time as Miss Minutes “looks for the files” — which is code for call the guards. Cornered, Sylvie prunes herself. That’s clever, because she will also end up in The Void.

As Loki turns the conversation towards the end of their lives, Classic Loki notes that he didn’t use knives as they are silly and a mockery of their magic potential. He fooled Thanos with a projection, faked his death, and drifted in space. He then decided to remove himself from the equation for he just caused destruction everywhere. Classic Loki lived a solitary life at the edge of space for a long, long time. But he got lonely and when he tried to get off the planet, the TVA arrive. God of Outcasts is our one part to play, he concludes. The other Lokis nod, but our Loki isn’t fully convinced.

In a mighty rallying speech in Loki episode 5, he pitches that they can kill Alioth — together. But Loki is merely laughed off by the others who have spent a lot more time inside The Void. Disappointed, Loki walks out of their protective hatch only to be confronted by a dozen more of him. One of them looks exactly like him, except he’s got horns and wearing a vote badge. That’s President Loki. Inside, as President Loki notes what he’s going to do with the others, alligator Loki jumps at him and snaps his right arm off. That starts a fight, while our Loki looks dejectedly at the petty squabbles. He’s not alone in that line of thinking, as Classic Loki conjures up an illusion and sneaks them away. Loki finally convinces Classic and Kid Loki to help him, but they will only get him to Alioth. Nothing more.

Elsewhere in Loki episode 5, the pruned Sylvie appears in The Void and is immediately chased by Alioth. She briefly links into it with her enchantment magic and is served with a momentary vision. Sylvie jumps into an approaching car, which turns out to be driven by Mobius (Owen Wilson) who was also pruned in Loki episode 4. Oh, so The Void is one big place for everyone. After they escape Alioth, Sylvie wonders she can find the actual folks behind the TVA. Realising the cloud itself might be the answer, she asks Mobius to turn around and head for the cloud.

Loki episode 5 switches to the three Lokis who approach Alioth as part of Loki’s plan. But after seeing Alioth consume a destroyer escort — it’s the USS Eldridge, a funny call-back to the infamous alleged Philadelphia Experiment — Loki starts to rethink his blind charge-the-villain strategy. He’s further mocked by Sylvie, as she and Mobius join them. That was your plan? Wow. (“You throw a rock out here, you hit a Loki,” Mobius jokes as he meets Classic, Kid, and alligator Loki.) Loki wants to know what Sylvie has cooked up. She says she is going to enchant the cloud, and she thinks it will work as she believes Alioth is just a guard dog for the person beyond The Void at the end of time.

Back at the TVA in Loki episode 5, Ravonna questions Hunter B-15 (Wunmi Mosaku) who’s been imprisoned for briefly freeing Sylvie. B-15 wants everyone at TVA to know the truth about the Time Keepers — they were just mindless androids — but Ravonna just wants to know what drives Sylvie. B-15 then realises that Ravonna wants to find the people behind the TVA, just like Sylvie. It’s not about protecting TVA or keeping things stable, as she claims. But Ravonna won’t get there before Sylvie, B-15 notes, because you only “want” it while Sylvie “needs” it. Outside, a frustrated Ravonna asks Miss Minutes to get all the files on the founding of the TVA.

Loki episode 5 jumps back into The Void, where Loki and Sylvie are having a cute moment. They touch upon Mobius’ theory of their nexus event on Lamentis-1, but they both prefer to be in denial rather than talk about it. They are slowly getting there, though. Loki conjures a blanket for himself and then spins it around Sylvie too. There are clearly feelings here that neither wishes to acknowledge outright. Sylvie then moves things along, wondering, “How do I know you won’t betray me in the final moments?” Loki is quite upfront about the truth, noting that he has betrayed everyone he has ever known. That’s not going to aspire confidence. “But that’s not who I am anymore, I won’t let you down,” Loki adds. They wrap up by considering the future, with Loki saying: “Maybe we figure it out together.”

As they gather with the other Lokis and Mobius, Sylvie reveals she had a brief connection with Alioth when she first came into The Void. She thinks she can do that again in a bid to subdue it. As Classic and Kid Loki depart, the latter hands Loki his golden dagger. Mobius is meanwhile returning to the TVA to burn it to the ground. That leaves Alioth to Loki and Sylvie. As the monster cloud approaches, they realise they might not be able to wait for a variant distraction to appear. Loki takes it upon himself with his fiery dagger, so Sylvie can enchant Alioth. But the moment she tries to link into Alioth, it ignores Loki and runs toward her.

Thankfully, Classic Loki shows up to lend a hand, creating an entire Asgard with his projection abilities. Alioth tries to devour it, giving Sylvie more time to do her thing. She persuades Loki to try it with her. He says he doesn’t know how. “You do, we are the same,” Sylvie tells him as they hold hands. Hooking into the purple cloud, they close their eyes and use all their might. Classic Loki has done all that he can, and just as he’s consumed by Alioth who then swarms the enchanting squad, it stops and turns green right on time. It’s done! As the cloud and smoke clears, Loki episode 5 shows us a mansion under the cosmos in the distance. Loki and Sylvie walk towards it, hand in hand.

Loki episode 5 is now streaming on Disney+ and Disney+ Hotstar. New episodes release every Wednesday around 12:30pm IST/ 12am PT.