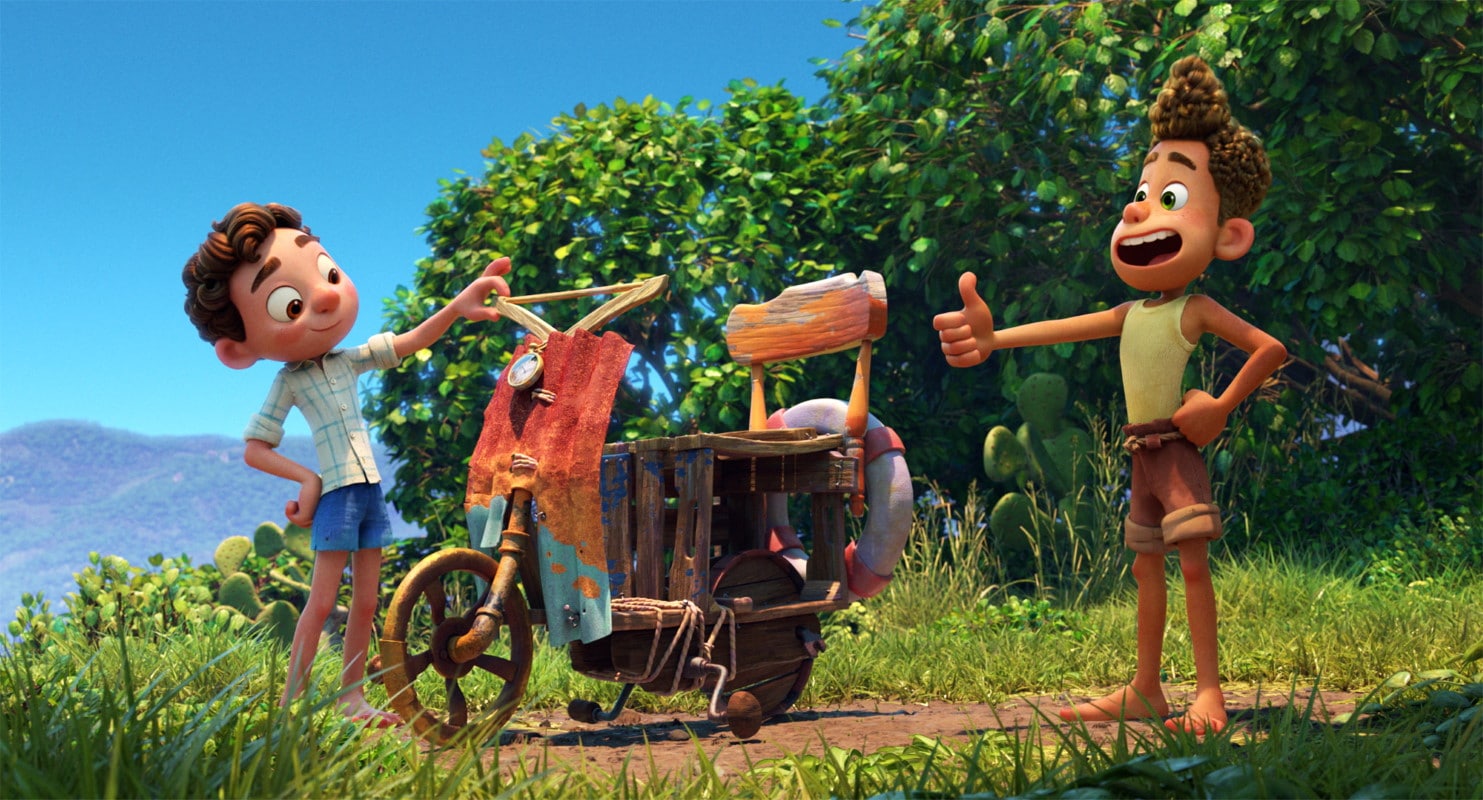 Luca is an ode to friendship. The 84-minute Pixar movie on Disney+, from feature directorial debutant Enrico Casarosa, is inspired by his own childhood — Luca is dedicated to Casarosa’s best friend Alberto Surace, whose name he lends to the deuteragonist and the title protagonist’s best friend — in the Italian Riviera in the 1970s and 1980s. It’s set in a world that takes after the 1950s and the 1960s, for Casarosa doesn’t feel as nostalgic (yet) about the eighties. But Luca‘s is also a fantasy world. The aforementioned Luca (voiced by Jacob Tremblay, from Room) and Alberto (Jack Dylan Grazer, from Shazam!) are actually “sea monsters”, feared and hunted by the humans who live above the surface. Though technically, they are shapeshifting amphibians, that become fish in water, and human on land.

For Casarosa, this is the centrepiece as it allows Luca to explore what it wants to talk about. At its core, Luca shows how prejudice and fear of the unknown — while the likes of Luca and Alberto are repeatedly called “sea monsters”, we never see them do anything remotely monstrous — can divide us. You can also see it as a film about xenophobia, a timely message in an increasingly nationalist world where people use our physical differences to discriminate against oppressed minorities. Or you can even view it from an LGBTQ+ lens, as many already have. Though Casarosa has said it wasn’t intended as such, Luca does fit the bill. It’s a coming-of-age story of two young boys in the ‘60s who have to hide their true selves from everyone around them in fear for their lives.

Of course, Luca — written by Jesse Andrews (Me and Earl and the Dying Girl) and Mike Jones (Pixar’s Soul) — is about more than that. Luca is a literal fish out of water in the new Pixar movie, and he’s naturally fascinated by the ways and creations of humans. Central to that is Luca and Alberto’s shared love for Vespa, the Italian scooter brand that made a name for itself as a style icon in the second half of the 20th century. Luca also explores the importance of facing your fears — epitomised in Luca through a running “Silencio Bruno!” gag — and the role that friends play in pushing you beyond your comfort zone. It’s also about giving them the room to grow while still being there for your friends.

All of this is brought to life with some of Pixar’s most stylised animation to date — Casarosa & Co. have spoken about how they were inspired by traditional 2D animation, Japanese woodblock paintings, a bunch of Italian classic movies, and the works of the legendary Hayao Miyazaki — and paired with a scintillating background score by Dan Romer (Beasts of the Southern Wild) that is at once serene, playful, tingling, and epic.

From Luca to The Family Man, What to Stream in June

Below the surface, Luca Paguro leads a simple sheep herder sort of life. Except that his flock is fish, since he lives in the sea. While Luca’s grandmother (Sandy Martin, from Napoleon Dynamite) indulges him and his father Lorenzo (comedian Jim Gaffigan) lives in his own world, Luca’s mother Daniela Paguro (Maya Rudolph, from Bridesmaids) is very strict and protective of him. She ensures that Luca always comes home on time and questions him daily if he spotted any boats of those “land monsters”. One morning, after Luca comes across human artefacts as he’s out shepherding, he follows the breadcrumbs and bumps into a fellow sea monster, Alberto Scorfano. It turns out that Alberto lives on land, which is equal parts shocking and terrifying for Luca as he’s been told to stay away from the human world all his life.

The curious Luca is equal parts amazed and intrigued by his brief time above the surface. Naturally the next morning, Luca returns to see Alberto who it turns out is a bit of a show-off. Alberto is a self-proclaimed master at “human stuff”, claiming that his (missing) dad told him everything and that he has been on his own for a while. But Alberto also thinks that the stars are all fish, so clearly, he’s trying to hide his insecurities behind a façade. Luca doesn’t know any better though, and he’s too busy gaping at all the human stuff anyway. That’s how Vespa comes into the picture. Wowed by a Vespa poster, Luca and Alberto begin to dream of their own Vespa, building a rudimentary scooter to feel the thrill. There’s even a dream sequence filled with tons of Vespas.

All this love for Vespa might have felt like a product placement in Luca were it not so heartfelt. Casarosa infuses the Pixar movie with the sheer joy of what it’s like to discover something remarkable for the first time as a kid. When Luca and Alberto step into the nearby human town Porto Rosso, Luca introduces a shiny red Vespa just as a traditionally minded rom-com movie would highlight the female lead the first time she walks into the same room as the male lead. It’s the apple of their eyes, but it’s also tied to the Luca plot. The owner of the red Vespa, Ercole Visconti (Saverio Raimondo), turns out to be the braggadocio winner of the Porto Rosso Cup, an annual triathlon tournament that involves swimming, cycling, and …eating (because it’s hosted by a local pasta maker).

Realising that the Porto Rosso Cup will earn them money they can use to buy a Vespa — it’s funny initially because even the concept of money and purchases are foreign to them — Luca and Alberto team up with perennial underdog Giulia Marcovaldo (Emma Berman) who has beef with Ercole the bully. And as they begin preparing for the triathlon, Luca’s parents, who realise that he’s gone, begin looking for him in the seaside town.

The introvert-extrovert pairing of Luca and Alberto contributes to much of the early fun on Luca. While Luca has been brought up to follow the rules and is inherently risk-averse, the freewheeling Alberto craves adventure and runs headlong for it with nary a single thought. Casaraosa has talked about his own best friend Alberto pulled him out of his shell as kids, and Luca depicts that in a joyous fashion, showcasing how two opposite personalities can become friends so quickly. The introduction of Giulia adds an exciting third flavour into the mix, not least because she’s written as someone who is always fully herself — important in a society where girls are asked to be quiet, gentle, and unseen. Luca also touches upon how kids are quick to become jealous or possessive.

But at the end of the day, it’s sticking with them through thick and thin — as the old adage goes, a friend in need is a friend indeed — and having the courage to put yourself in a vulnerable position for the greater good. Luca is essentially about how some people have to pretend to be someone they are not, in a bid to conform to what’s accepted as normal. It’s why Luca works as a coming-out movie. Casarosa may not have intended it — in fact, Luca could have gone much deeper with the allegory, if indeed it was set up like that — but after release, a movie belongs to its audience not the filmmakers. Change starts with one person, Luca posits, and it can destroy power structures, foster acceptance, and bring everyone together. In an increasingly isolated world, that’s a great message.

Luca is out Friday, June 18 on Disney+ and Disney+ Hotstar worldwide. In countries without Disney+, Luca will release in cinemas. Available in English only in India with a Disney+ Hotstar Premium subscription.

It’s Google I/O time this week on Orbital, the Gadgets 360 podcast, as we discuss Android 12, Wear OS, and more. Later (starting at 27:29), we jump over to Army of the Dead, Zack Snyder’s Netflix zombie heist movie. Orbital is available on Apple Podcasts, Google Podcasts, Spotify, Amazon Music and wherever you get your podcasts.