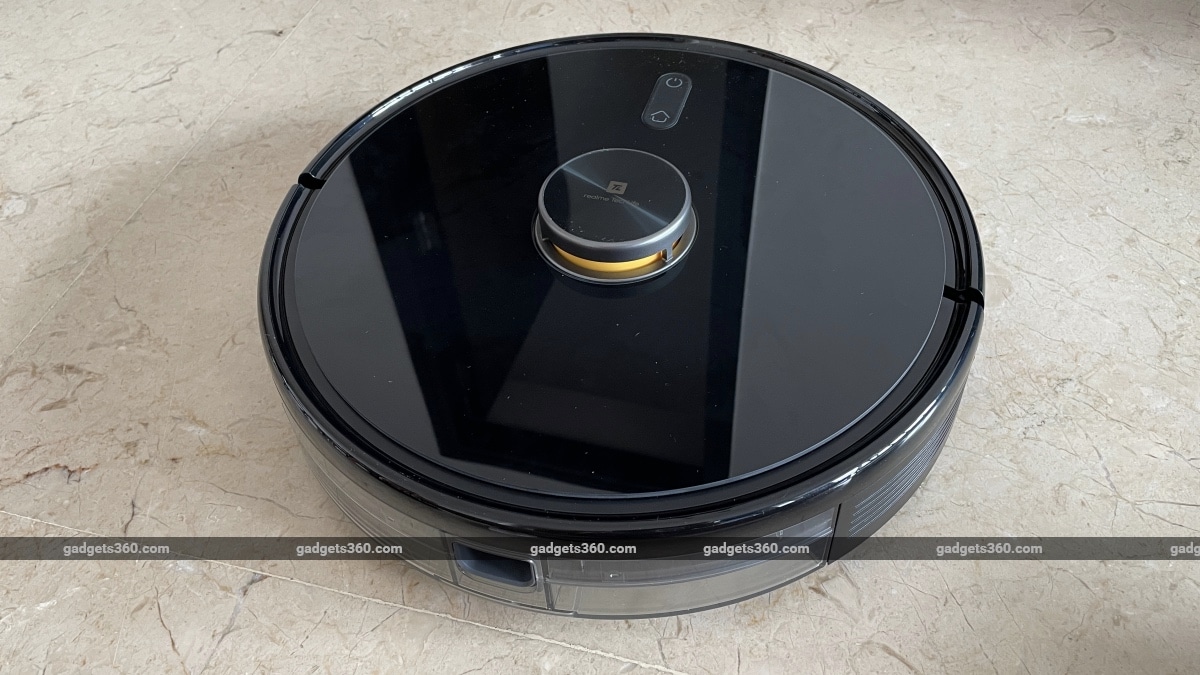 Xiaomi and Realme are rivals not only in the smartphone segment, but also in various other product categories that the two companies are a part of. Today, this covers audio products, televisions, streaming devices, tablets, laptops, wearables, and the smart home segment, with Realme usually entering the segment a little bit later, and almost always matching the pricing and feature set of the equivalent products from its biggest competitor. The rivalry has now extended to robot vacuum cleaners as well, giving Realme a much needed foothold in this emerging segment.

The Realme TechLife Robot Vacuum Cleaner uses laser navigation, which allows for accurate mapping and the ability to work in the dark

What is the Realme TechLife Robot Vacuum Cleaner, and what’s in the box?

Realme’s first robot vacuum cleaner isn’t just a vacuum cleaner; it’s also capable of wet mopping, which can be done simultaneously along with vacuuming. The device has two sweeping brushes at the front, the main brush in the vacuum zone at the bottom, and space at the back for one of the two fittings – the vacuum dustbin or a combination attachment that has a water tank, mop cloth, and a smaller vacuum dustbin. These attachments can be removed and fixed in place easily, when the robot is on standby.

The robot is disc-shaped like most cleaning robots available right now, and has a raised module at the top for the laser navigation system. The front of the robot has a flexible bumper, which absorbs impact when the robot bumps into walls, furniture, and loose objects on the floor.

There are two buttons at the top; Power and Home. These can be used to control the core functions of the Realme TechLife Robot Vacuum Cleaner even without needing to set up the app, but the full functionality of the device can only be accessed through the Realme Link app. The device is Wi-Fi enabled, and will need to be connected to your home Wi-Fi to enable app-based controls.

The Realme TechLife Robot Vacuum Cleaner uses laser navigation, which makes for accurate movement, organised cleaning paths, and the ability to work even in the dark. The robot and app can store maps, which you can use to set the order in which rooms are cleaned, or have the robot clean only individual rooms, among other functions.

Mapping was generally accurate, and navigation was acceptable for the most part, with the Realme TechLife Robot Vacuum Cleaner moving in efficient paths, avoiding most obstacles, and working quickly. You can select a Y-shaped mopping path instead of the default S-shaped path, which takes a bit longer but cleans more effectively by covering each area with two sweeps instead of one.

However, there were some minor issues with the navigation that I noticed during my review. For one, if I selected the Y-shaped path for mopping, this would sometimes remain active even while vacuuming. Carpet and no-go zone detection was sometimes iffy, and some rooms were on occasion ignored completely, even though they were accessible to the robot.

I was also unable to select some rooms in the room selection menu on a few occasions for no apparent reason, and could only clean the missed room by having the device automatically clean the whole house. The remote control mode – which lets you manually drive the robot to clean specific locations – was usually slow to respond to commands, and I found it quicker and easier to just pick the device up and place it in the room I wanted it to clean.

The Realme Link app is used to control the brand’s range of connected devices, including audio products, cameras, wearables, smart lights, and home appliances. The Techlife Robot Vacuum Cleaner works with this app on both iOS and Android, and appears on the home screen as an option alongside any other Realme devices you have linked with your account. When the Robot Vacuum Cleaner is turned on and connected to your home Wi-Fi, you’ll be able to select it and control it.

Once fully set up and after the robot has mapped your home, the app displays the map with rooms demarcated, and quick controls at the bottom. These include buttons to start and stop cleaning, send the robot back to the charging station, set the suction power, and access the detailed Settings menu. You can also choose different cleaning modes including Auto, Room, Area, and Spot cleaning.

The detailed Settings menu allows you to control schedules, remote control the device, manage maps, select specifics for mopping path and suction controls, and also see the cleaning history and remaining life of consumable parts such as the brushes and air filters. You can also use the home screen to edit room arrangements, set restricted zones, no-mop zones, and virtual walls. You can even define specific instructions for the suction power and water output for individual rooms.

When the mop fitting is attached, you can choose between vacuuming plus mopping, and only mopping. The app also displays statistics such as the area cleaned, time taken, and the exact battery level.

I experienced quite a few bugs during my time with the Realme TechLife Robot Vacuum Cleaner, with a few of them coming from the app. There were times when I couldn’t adjust the suction power while the vacuum cleaner was working; the option to do so was blanked out, and even after pausing the job and making my selection, it still didn’t actually change what the device was doing.

Although the water tank fitting doesn’t come in the box, Realme is providing it at no additional cost with the Robot Vacuum Cleaner

On other occasions, I simply could not connect to the Robot Vacuum Cleaner despite having no issues with Wi-Fi or my home Internet connection. I had to restart my router to force the robot to reconnect. There were a few other issues and bugs as well, which are mentioned in the next section.

It took around 45 minutes for the device to clean my 900-square-foot home, but the quality of cleaning depended on whether I was operating the vacuum and mop functions separately or simultaneously. Obviously, running both of these separately doubled the time taken, but cleaned more thoroughly. Despite having two sweeping brushes, I found edge cleaning on the Realme TechLife Robot Vacuum Cleaner to be somewhat inadequate, and I had to use a handheld vacuum cleaner to get the job done.

There are four suction modes with different levels of power: Quiet mode runs at 500pa; Normal mode at 1,200pa; Turbo mode at 2,500pa; and Max mode at 3,000pa. I usually had the Realme TechLife Robot Vacuum Cleaner running at the ‘Turbo’ power setting, but what you choose depends on the type of flooring you have and other factors such as how dusty it tends to get in your home. Naturally, the more powerful the mode, the louder the Robot Vacuum Cleaner runs, so you might want to use the lower modes on occasion.

I experienced some strange issues and bugs during my time with the Realme TechLife Robot Vacuum Cleaner, which held back the overall experience significantly. On two occasions, the device inexplicably stopped working, with the laser navigation emitter continuing to spin slowly but the robot entirely non-functional otherwise. This could only be fixed with a hard reset, which meant that I had to repeat the entire setup and mapping process before being able to use the device again.

Once a cleaning task is complete, the Realme TechLife Robot Vacuum Cleaner can navigate back to the charging dock on its own

Other issues included the device sometimes detecting the mop fitting as the vacuum fitting and therefore not mopping; occasionally not discharging any water even with a full tank and the mop mode active; and sometimes losing its Wi-Fi connection for a few minutes at a time. However, once a cleaning task is in progress, the Realme TechLife Robot Vacuum Cleaner is able to complete the task based on its saved map even if it loses Wi-Fi connectivity. It can navigate back to the dock or next room on its own, and will update its progress on the app when reconnected.

Like all robot vacuum cleaners, this one from Realme needs frequent maintenance in terms of keeping the dustbin and mop cloth clean, the water tank topped up, and the brushes free of tangles. I had to go through this process at least twice a week to keep the device operating efficiently.

Battery life on the Realme TechLife Robot Vacuum Cleaner is impressive, primarily because of its 5,200mAh battery capacity. After running it for vacuuming and mopping separately in my 900-square-foot home, the battery level dropped to 70 percent, suggesting that it can clean a much larger space in one go without needing to stop and recharge. This naturally also meant that it needed relatively little time to charge back to full after each cleaning task was completed.

From empty, the device takes around 5-6 hours to charge fully; this is a long time, but is understandable given the capacity of the battery. Of course, this will only be a factor with very large homes, and battery life won’t be a concern for most use cases.

Robot vacuum cleaners are still somewhat unusual and uncommon in India, although the segment is growing quickly with brands such as Xiaomi and Realme entering the space. That said, such products are still far from perfect and need regular maintenance to work properly. The Realme TechLife Robot Vacuum Cleaner is a technically adept, well-priced device, but I had to deal with far too many bugs and issues during my experience, in addition to the typical drawbacks of a robot vacuum cleaner.

Its ability to clean is decent thanks to plenty of suction power, the app is excellent, and battery life is class-leading. However, the issues with the app, navigation, and general functionality are too serious to ignore. It might perhaps make sense to wait for Realme to roll out fixes for these issues before considering this model; till then, you could also look at the Mi Robot Vacuum-Mop P or 360 S7, which have similar features and functionality.