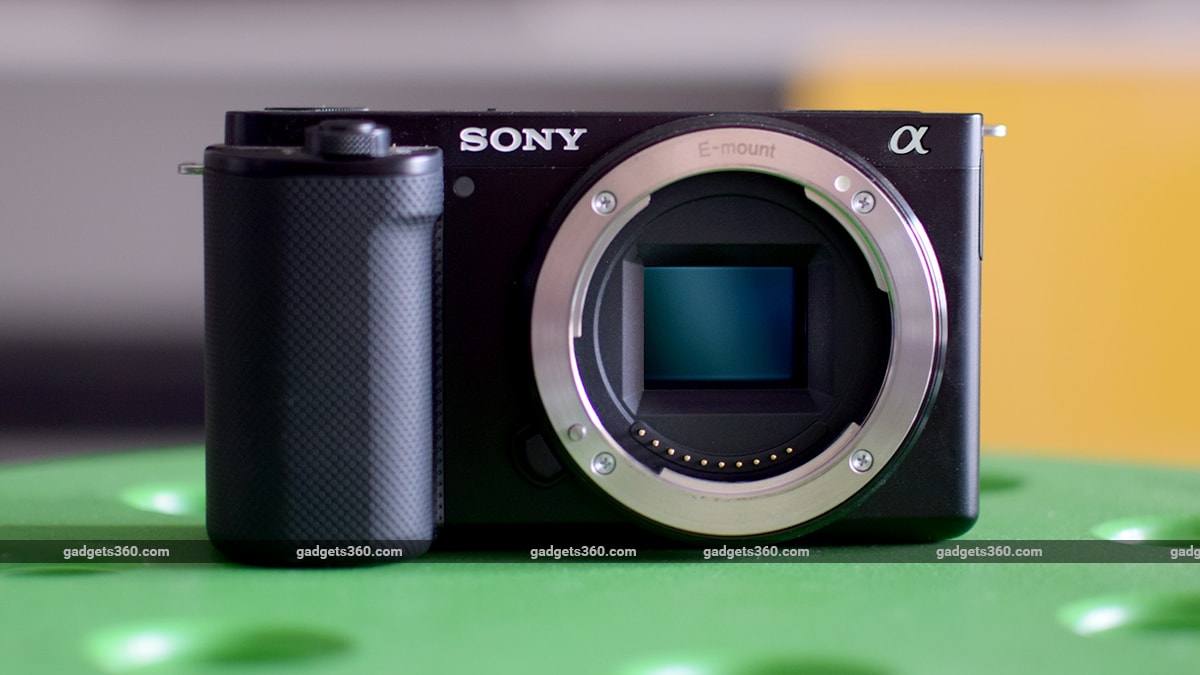 Sony has added a new model this year to its vlogging camera series called the ZV-E10. It’s not a follow-up to the Sony ZV-1, which launched last year, but is more of an advanced version of it which supports interchangeable lenses and has a larger sensor. What’s even more interesting is the price of this camera. It’s only a bit more expensive than the ZV-1, but costs less than Sony’s A6100, with which the ZV-E10 shares a lot in common.

If you’re just starting out as a content creator and don’t want to spend big bucks on very expensive gear just yet, you might be wondering what to buy. Is the Sony ZV-E10 the best budget vloggers camera for the job? Let’s find out.

The Sony ZV-E10 has slightly larger dimensions than the ZV-1 but is still relatively compact even with the 16-50mm kit lens attached. The body weighs 343g but the total weight will vary depending on the lens you are using. The camera retains the shortcut buttons for vlogging features that we saw on the ZV-1 such as Product Showcase and Background Defocus, but the layout is a bit different.

The Sony ZV-E10 has an additional dial on the top and a new mode button that cycles through stills, video and S&Q (Slow and Quick) shooting modes. This camera has a three-capsule microphone on the top along with a hot shoe connector to its left. There’s no built-in electronic viewfinder (EVF) so all framing and interaction with the camera has to be done using the LCD screen.

The handgrip of the Sony ZV-E10 is meatier compared to that of the ZV-1, as this camera uses the same battery as the A6100. The build quality as well as the fit and finish of all the panels is very good. On the left, we have two flaps that protect the microphone, USB Type-C, Micro-HDMI, and headphone connectors. On the bottom of the camera, we have a single compartment for the battery and SD card at one end and the tripod mount at the other. Unlike the ZV-1’s flawed design, you can swap out the battery on the ZV-E10 even when it’s mounted on a tripod.

The Sony ZV-E10 features a 3-inch fully articulating LCD panel with touch support. Like most Sony cameras, touch functionality is limited to setting the focus and reviewing images. You can buy just the body of the ZV-E10 for Rs. 59,490, or you can get this camera with the powered 16-50mm kit lens which retracts inwards when the camera is off, for a smaller footprint. The latter bundle is priced at an MRP of Rs. 69,990. This lens has a power zoom slider for smoothly zooming in to and out of your subject. In terms of optics, it has an aperture range of f/3.5 to f/5.6, so it’s not the brightest or fastest of lenses, but it gets the job done for casual use.

There’s a good selection of ports, including a headphone jack and a USB Type-C port

The biggest change in the ZV-E10 compared to the ZV-1 is its larger 24.2-megapixel APS-C sensor. This new camera uses Sony’s E-mount system which means you have a lot of choice when it comes to lenses. The ZV-E10 shares a lot of features with the A6100 such as a native ISO range of 100-32,000, 425 phase detection and contrast detection autofocus (AF) points, animal Eye-AF for stills, and a maximum of 11fps burst shooting in Hi+ mode. The ZV-E10 goes one step ahead of the A6100 with support for advanced picture profiles such as S-log3 and HLG for HDR workflows. This camera can be used as a webcam when connected to a computer via a cable. There’s also Wi-Fi connectivity for transferring images to your phone, for which you’ll need Sony’s Imaging Edge app.

The menu system will be familiar to existing Sony mirrorless camera users. You still can’t use the touchscreen to navigate through the menus, but you can move around pretty quickly once you get the hang of using the buttons and rear dial. You can adjust the autofocus tracking speed, change the default shortcuts of the rear dial, and lots more from here.

Just like the Sony ZV-1, the ZV-E10 makes vlogging very easy. Just point the camera towards yourself, and the superb tracking system takes care of the rest. The Background Defocus shortcut is very useful when you’re vlogging and want to cut out distractions. The flip-out screen makes it easy to keep track of whether this feature is active or not. The Product Showcase shortcut is useful when you want the camera to focus on an object you’re holding up without having to block your face. When enabled, the camera essentially disables face tracking so it automatically shifts focus to the object closest to the lens. A thick red bar appears on the LCD screen to alert you that recording has begun, which is convenient. Another feature that I found useful is the ability power on the camera by simply flipping the LCD display open. You’ll have to leave the power switch in the ‘On’ state for this to work.

In terms of image quality, the Sony ZV-E10 performs much better than the ZV-1, all thanks to its larger sensor. The advantage of having an APS-C sensor versus a 1-inch one can easily be seen in our ISO test. The Sony ZV-1 maxed out at ISO 12,800 with a grainy image but the Sony ZV-E10 on the other hand delivers a relatively clean and sharp image at the same ISO level. There is minor degradation in quality at ISO 12,800 compared to the lower ISO levels, but it’s barely noticeable. It’s only when you get close to the ZV-E10’s native maximum ISO 32,000 level that you will begin to perceive poorer sharpness and a bit of grain.

The ZV-E10 has a maximum extended ISO level of 51,200 but the image quality degrades quite a bit when pushed this far, so it’s best left for extreme situations only. Overall, the camera delivers very good high ISO performance for the price, and even rivals Sony’s own A6100.

The Sony ZV-E10 is great for casually capturing everyday sights and events. The 16-50mm kit lens offers decent sharpness at the widest focal length but this drops a bit at higher zoom levels. I also noticed a bit of chromatic aberration in some photos but it wasn’t so bad as to ruin a shot. The camera tends to resort to a high ISO even during the day, since the lens doesn’t have a very wide aperture and it gets narrower as you increase the focal length. For sharper photos, you’ll be better off using a fast prime lens with this camera.

Eye and face detection work very well too. The Sony ZV-E10 even supports Eye-AF in video at up to 4K, but only for human subjects. You’ll need to remember to switch the Eye-AF to either human or animal, depending on your subject. Animal Eye-AF worked well in my experience when I was shooting stills of some local stray cats. Sony’s tracking autofocus is also pretty reliable, and the reticule remembers your subject even if it moves out of the frame for a moment and comes back in.

Daylight shots taken with the Sony ZV-E10 generally had good details and colours, given the limitations of the kit lens. In low light, the noise reduction feature in the camera does a decent job with keeping images clean. I did notice a bit of focus hunting when trying to shoot distant objects at the telephoto end of the zoom range, but this wasn’t a regular occurrence. 4K videos packed in very good details and tracking autofocus worked well even for fast-moving subjects like pets.

There’s electronic stabilisation which worked well enough under good light, but at night, there was noticeable jitter in video. Rolling shutter was an issue when shooting at 4K (a jelly-like effect when panning the camera left or right quickly) but this effect was minimal at 1080p. This could be a big problem if your shooting style does include rapid pans. If it does, then you’ll have to use a lower resolution to avoid it.

Battery life was more than satisfactory. The Sony ZV-E10 uses the same NP-FW50 battery as the A6100 but is rated to deliver a slightly better 440 shots per charge (versus 420). With actual use, I was able to go beyond the rated number, which is generally the case. Even with mixed usage of stills, burst shots and short 4K video clips, I was able to comfortably get through more than half a day of shooting. The ZV-E10 can be powered through its USB Type-C port too, so you can continue filming if you connect it to a power bank.

The Sony ZV-E10 has the best features of the ZV-1 and the A6100 in a single package, and is priced between them, which makes it a no-brainer to choose. If you haven’t already bought the ZV-1 or the A6100, the ZV-E10 is what you should be looking at.

Compared to the ZV-1, the ZV-E10 offers more flexibility in terms of lens choices, better battery life, and better image quality. The Sony A6100 is more expensive than the ZV-E10, and with it you would get an electronic viewfinder and full-blown mode dial. However, apart from these features, the two cameras are not too different. In fact, the ZV-E10 does a few things better with its USB Type-C port, S-Log and HLG picture profile support, headphone jack, and more, while costing less. Rolling shutter is a problem when shooting at 4K on the ZV-E10, which I’m hoping gets addressed with a future firmware update.

Overall, the Sony ZV-E10 is a solid entry point to the world of mirrorless cameras. It’s easy enough to use for beginners, but offers plenty of advanced features to keep pros happy too.